Rebecca Tasker, with a crew of apprentices, is building two straw bale houses near Escondido, California. So the building project is also a teaching site. 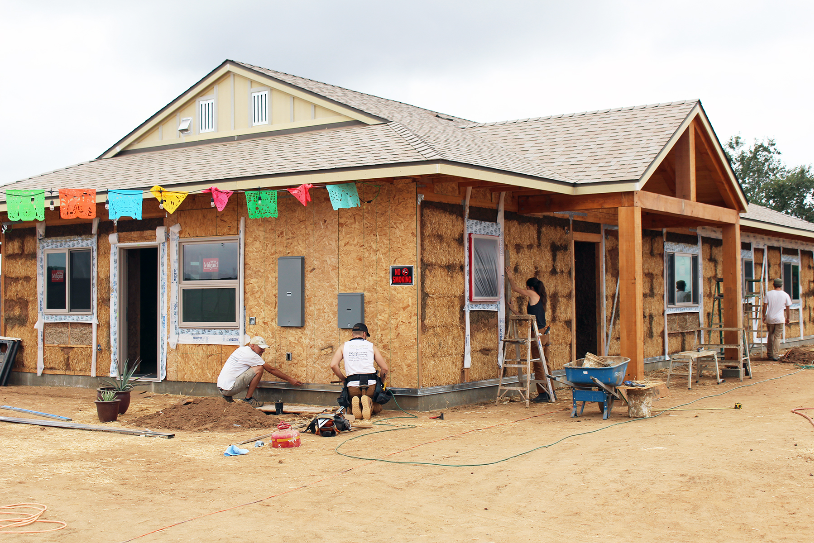 “Using straw fits in with permaculture. People like sustainability,” Tasker said. “When you talk of energy used for building materials, that energy was already used in growing the food that the straw is left over from. It’s a super insulator.” A well-built house will typically have a R19 value while straw bale houses have an R30 value. “You won’t need air-conditioning,” she said. “The County requires that you install heating but you won’t use it much.” Another advantage of a straw bale house is that it doesn’t use toxic insulating materials.

“No house is fire proof, but once they are plastered over they have a much higher resistance rating,” said Tasker. The framing material is large timber Douglas fir that won’t catch fire easily. It takes one to two hours for such a house to burn, compared to 30 minutes for most houses. So there is more time for firefighters to get to the structure to put the fire out.

Straw bale buildings also act as a “carbon sink,” drawing carbon out of the air. “About sixty times more carbon is sequestered in a bale than is emitted in the production of the materials,” said Tasker.  “For a long time the green energy has focused on how much is produced after the house is built. We are focusing on how much is produced in the building of the house.” 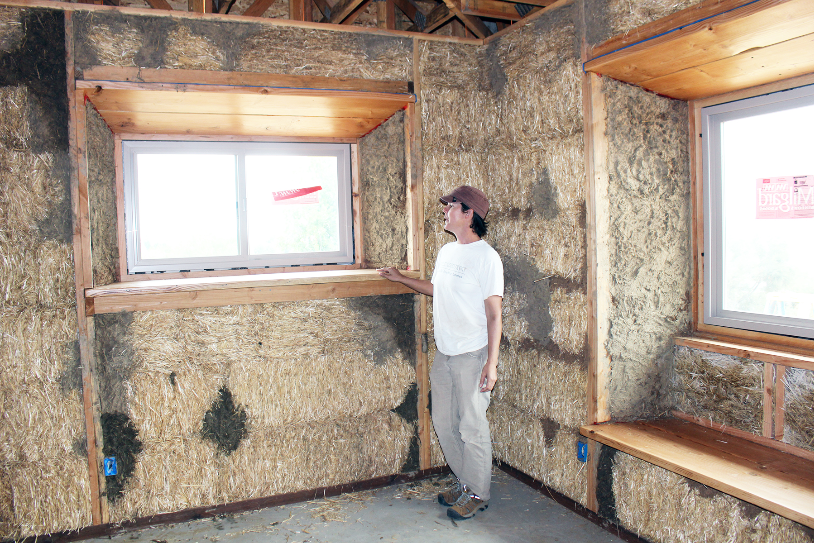 Another sustainable feature of the houses will be a rainwater capture system that will collect 600 gallons for every inch of rain. Given the total of 3,000 SF of roof that would mean 2,000 gallons every time an inch falls.

The home construction will take a total of from six to nine months to complete. This crew is building a larger house of 1,500s square feet for one couple, and a smaller 1,200 SF house for another couple.

Tasker and her husband Mike Long run their business as a Benefit Corporation which means that, “although we are a for-profit company, maximizing profits is not our only consideration. We have written into our articles of incorporation that: ‘The specific public benefit of this corporation is to preserve the environment and improve human health by reducing the embodied-energy, consumption, toxicity, and carbon footprint of construction through the use of local, natural, and carbon-sequestering building materials.’ ”

You can read the original article at www.valleycenter.com