Nearly a decade ago, Gaytri Bhatia gave up a well-paying job as an environmental analyst with the United States Environmental Protection Agency in Boston and moved back to India to take over her family’s ten acre farm and orchard. She has been transforming it from primarily mango production to a much more diverse food forest. 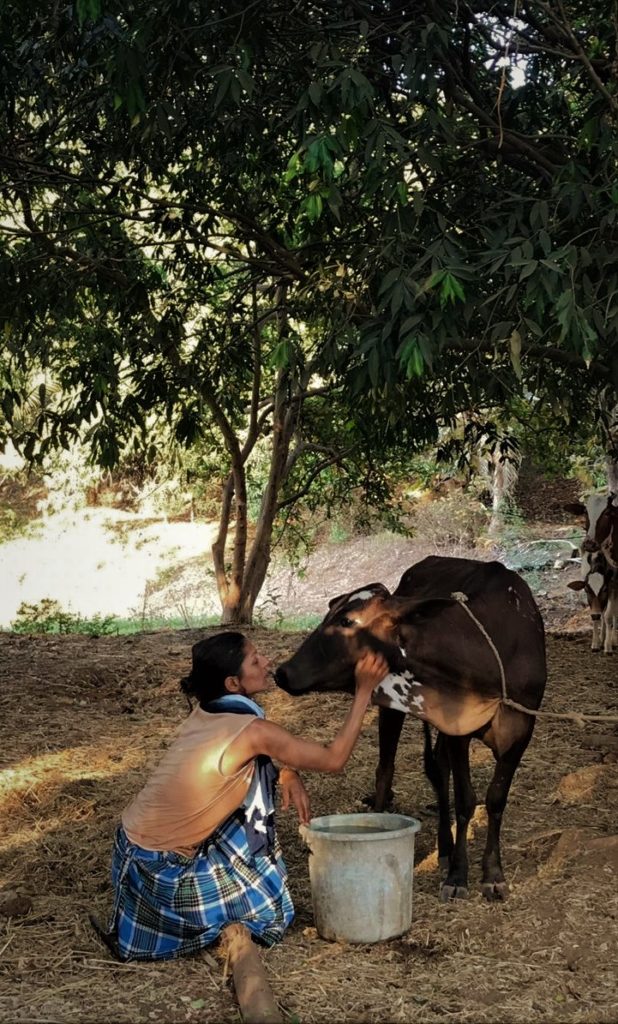 Gaytri says, “Over my years of (environmental) consultancy, I recognized that a paradigm shift was needed in the way we treated ourselves and the earth, one that could be scaled up only from the roots. Working in environmental analyses prepared me for the extent of the damage being done to humanity via damage of the earth in our industrial-driven lifestyles. Farming was the way to grow this change.”

“Seed production today is owned by the very companies that developed chemicals for warfare. The manufactured seed is resilient to chemical interventions (pesticides like Roundup) that in turn kill the surrounding natural order, which is essentially everything, except the plant born from a modified seed. But the seed is sovereignty and cannot be left to a power-hungry minority; it should always be in the hands of the masses.”

“The cow is at the center of natural agriculture. Four cows (2 of which are calves) live on the land. Their excreta for us is gold—the core ingredient in our home-brewed fertilisers and pesticides. They graze off the land itself.”

“Despite the progress in industrialized farming (along with its sizeable environmental footprint), small scale farmers produce about 70 per cent of the global food. Natural farmers adopt a holistic, self-sustained approach to farming, one that has stood the test of time, nourished humanity and nurtured the earth. The greed of humanity can no longer be overlooked, we’ve got to awaken, start making informed and deliberate decisions.”

“Our questions (on the consumer side) should be – Where does this come from? Is it in season? Would my grandmother have recognized this as food? If there are more ingredients listed on your yogurt than milk and bacteria, what are they? And why? And in this, we’ll find ourselves synchronizing with the earth. We should work once again with our hands. Feel what it’s like to touch the soil, grow a plant, prepare your own bread, or even walk with your dog for that matter. And for agriculturalists, we should take back the lands. Take back the seed. Once again, become responsible. In this, is freedom.”