Spartan Giordano was 28 years old when he designed and started building a zero fossil fuel energy home In Greenfield, Massachusetts. Two years later he and his partner Hannah got the occupancy permit on the very day their son, Max, was born. Nine years later Hannah and Spartan have a 2½-year-old daughter and Spartan has built a business installing solar hot water for other people called Spartan Solar. 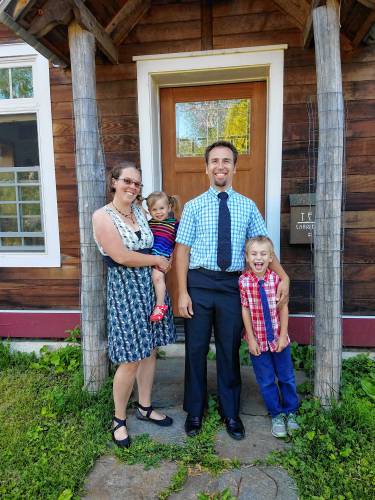 Spartan said, “I have not paid an electric or heating bill for seven years, since both the solar hot water and collectors generating electricity started running — just water/sewer, mortgage and taxes. Small houses (1,500 square feet) are less expensive to build and operate.”

The house was built on an insulated slab and has a tile floor that collects solar rays and stores heat, warming during the day and releasing warm air in the evening.

Downstairs, there’s an open-concept living space and kitchen that has a tech space/pantry/“root cellar.” The house has two bedrooms upstairs. “We certainly fill it up,” Giordano said. “The third floor bedroom is now studio/office. We hadn’t anticipated both of us also working here.”

There are a few windows on “the cold north side, but the south side of the house has windows with specialized glass, carefully placed to collect solar heat, under an overhang to avoid over-heating in the summer,” as the sun is higher then. “Perhaps my one regret is that we could not, at the time, afford more of those excellent three-pane glass windows for the whole house.“ Giordano said.

The house is so tight that even with excellent ventilation, Giordano checks the moisture level regularly to make sure they avoid mold. With a house this tight, just four people being alive and breathing inside creates heat and adds moisture.

The bathroom, on the second floor is right next to the two bedrooms and big enough to include an efficient washing machine. In the summer, they open the windows, hang the wet clothes a few feet from the machine and dry them with upwelling air in the stairwell, out of sight. In the winter, with the windows shut tight, they rely on a ventilator/dehumidifier in the bathroom. It dries the clothes and serves the bathroom.

Two years after the house was built, they added 3.5 kilowatts/solar electric panels, generating all their electricity from sunshine. The house’s electric system is hooked to the grid and the grid provides a back-up system, supplying electricity even when it’s dark. During the daytime, it is, essentially, running the meter backwards They also have one of those highly efficient heat pump/mini-splits, about four times as efficient as an ordinary electric system — it provides heat in the winter, cool air in the summer.

All of the family’s hot water is heated with rooftop solar. “It is even a more efficient use of sunshine than using solar for electric hot water heaters,” he continued,

You can read the original article at www.recorder.com