Four years ago, architect Richard Morris co-founded Pounamu, a bamboo design and construction company in Myanmar, with Soe Win Zaw, a Burmese structural engineer. Before this he had no knowledge of bamboo construction. When he was asked to design a new school in Shan State his bamboo education began. Following Rudolf Steiner principles, the school’s founder wanted the structure to feature natural building techniques. Then he learned that Myanmar was home to the third-largest area of bamboo forest in the world (after China and India). It was a no-brainer moment.

Unfortunately the skill level associated with bamboo construction in Myanmar is very low. Bamboo has long been eclipsed by timber and concrete as a permanent building material. Locals know how to make temporary bamboo structures, such as roadside mango stalls, but these structures can be relied on for only two or three years’ service. After that time, bamboo exposed to sun and rain will have weathered to the point of collapse or been attacked by  powder-post beetles or termites. 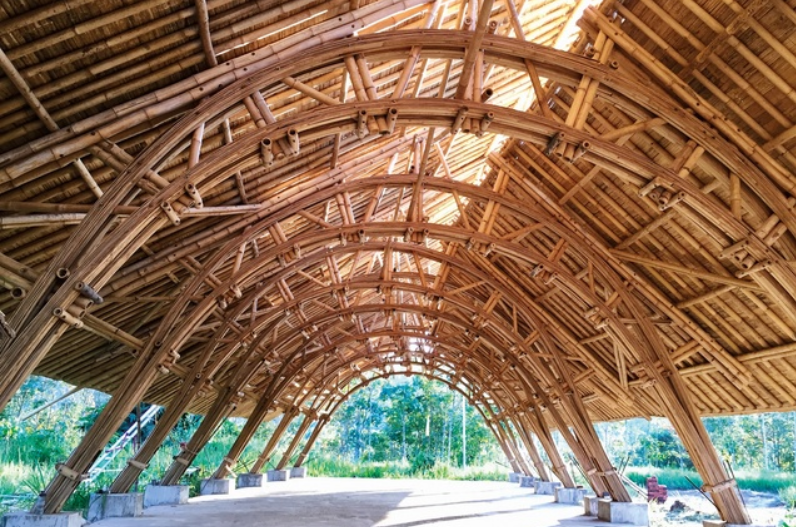 Richard traveled to the Green School in Bali to take part in a two-week introductory bamboo training course. He learned about the unique perennial growing characteristics of the bamboo, producing useable timber year-in, year-out over the 50 to 100-year life cycle. He learned about the cellular structure that makes bamboo so strong. Compared with timber, steel and concrete, only steel has a greater strength-to-weight ratio, but bamboo is stiffer than all three. He also learned about a non-toxic preservative treatment process that uses a solution of natural borax salt to extend the life of harvested bamboo from a couple of years to 30 or 40 years, or even longer. 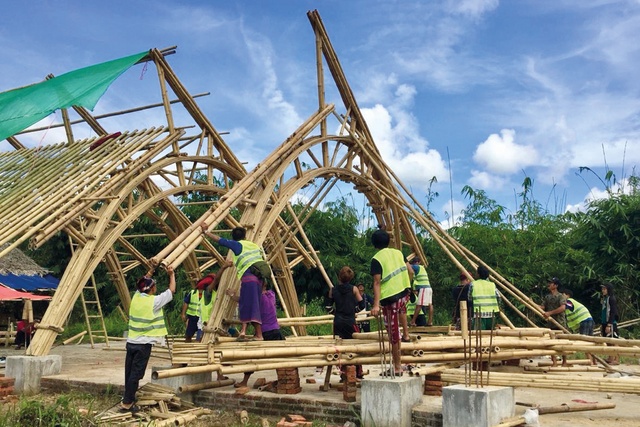 He learned construction techniques that are able to produce Green School’s spectacular four-, five- and six-storeyed buildings. These structures are built using teamwork and do not require heavy machinery, making this type of construction ideally suited to the remote areas in Myanmar where Pounamu operates. Pounamu was able to bring small teams of expert bamboo builders from Indonesia to Myanmar to construct a bamboo building and pass on their skills to local workers. 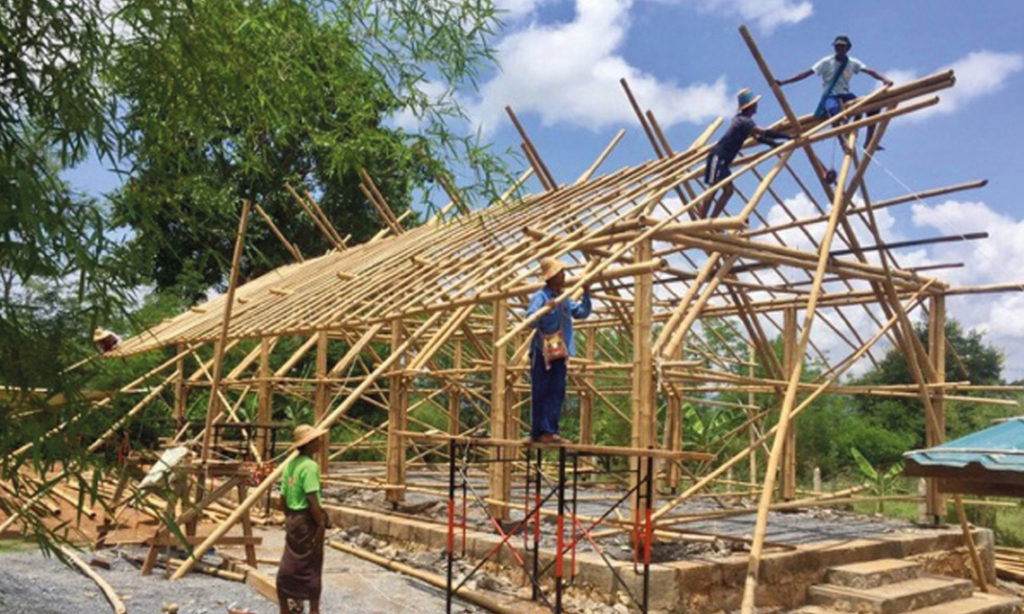 Pounamu’s initial projects were deliberately simple. They needed to dispel the locals’ perception of bamboo as the poor man’s timber. Amway Hlu, a prayer hall for a small Buddhist monastery near Zaw’s home village in Shan State, was one of Pounamu’s first projects which adopted this simple approach.

Like many Pounamu projects, a key aspect of a World Wildlife Fund project in the village of Kyiek Pe Lan was its significant amount of community engagement and teaching. The training building is open-sided and provides a sheltered space for workshops related to sustainable agriculture, community health and general vocational training.

In its first year, a new bamboo shoot will grow to the full height and diameter of the mature culms in the clump. For a typical construction bamboo, this could be 30 metres in height with a base diameter of 20 centimetres. The bamboo culm (the bamboo pole before harvest) reaches its maximum strength between its third and fifth year.  Managing the bamboo forest so that only three-to-five-year-old culms are harvested greatly improves the yield and the quality of the bamboo. 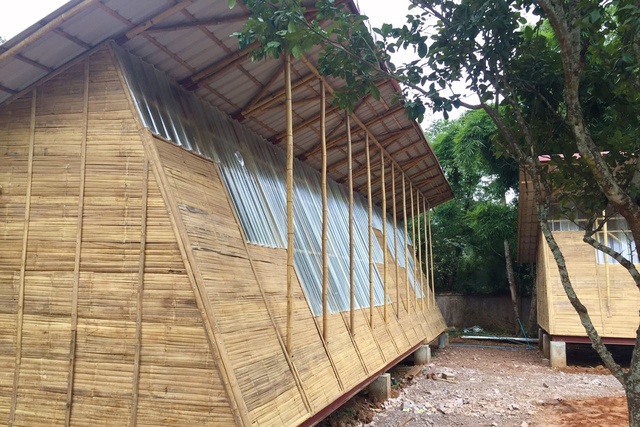 The Indian monsoon makes it virtually impossible to build anything in Myanmar between April and October. The school, comprising four classrooms for kindergarten and new-entrant children, had to be open by 1 August so the solution was prefabricated classrooms, which could be flat-packed and transported to site from the factory 300 kilometers away. Once the components arrived on site, the four classrooms were erected and ready for use in just under four weeks. The cost of each classroom, delivered to site and erected, was US$10,000. 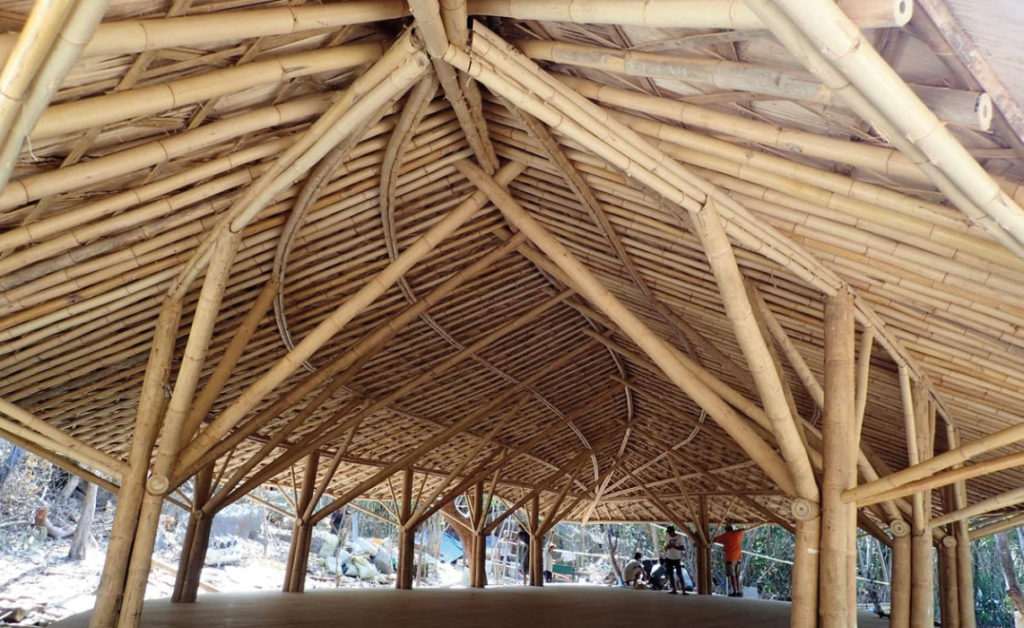 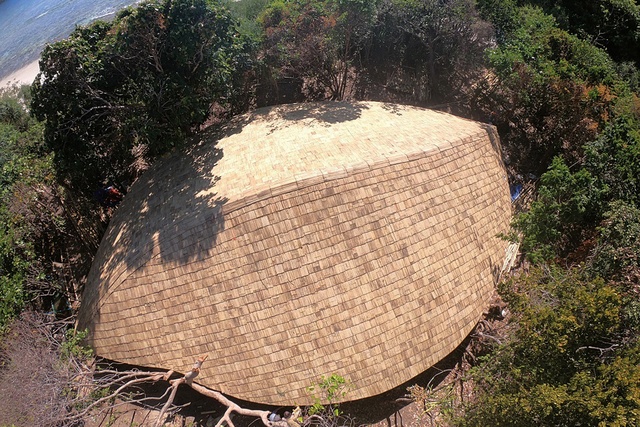 Boulder Island is a pristine island on the outer edge of the Mergui Archipelago. Pounamu recently completed a multi-purpose hall for the resort, which will be used for yoga retreats, weddings and corporate training. 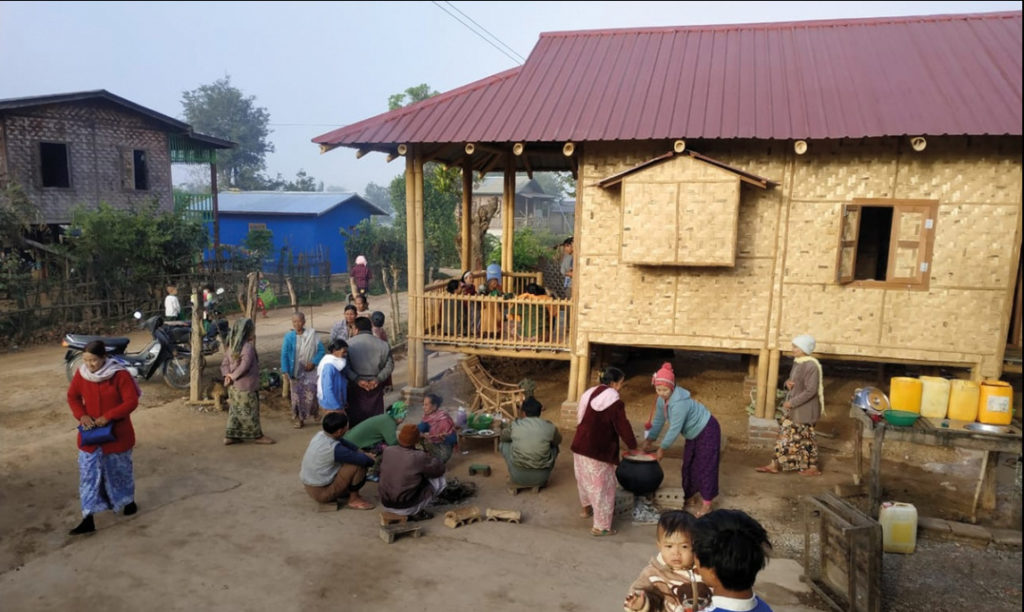 Last year, Pounamu started collaborating with Habitat for Humanity on the design of a prototype for a low-cost, single-family dwelling based on a traditional Burmese rural house. It comprises two bedrooms, a family room with Buddha alcove, a generous front verandah and a kitchen to the rear. The total construction cost, including foundations is US$4000. The home was donated to a family of four in the village adjacent to our factory.

Pounamu believes  that concrete and steel will eventually become prohibitively expensive as the true carbon costs of these materials are passed on to the consumer. Timber supply may come under pressure, not just from drought and more-frequent forest fires but, also, from increased demand for packaging products, especially as single-use plastic heads towards prohibition. So, what is left? Expanding the bamboo industry, which is based on sustainably managed plantations and simple, high-quality structures, has the potential to generate sustainable livelihoods.

Bamboo also brings a raft of environmental benefits. These include its ability to restore degraded, deforested landscapes rapidly, to recover falling water tables, to provide a safe haven in earthquakes and cyclones, and to sequester very high amounts of carbon in its prodigious initial five years of growth.

For more information, see www.pounamu.com.mm You can read the original article at architecturenow.co.nz

3 thoughts on “Bamboo Building in Myanmar”