Ladakh has a long and harsh winter season when temperatures hit as low as -30°C (-22°F).
These long winters reduce the cropping season to barely four or five months in a year. Other factors include low precipitation largely in the form of heavy snowfall, high wind velocity, sparse plant density, thin atmosphere with high volumes of UV radiation and a fragile ecosystem.

To address this critical concern of the Ladakhi people, researchers at the Defence Institute of High Altitude Research led by senior scientist Dr Tsering Stobdan have developed a new model of the Ladakh Greenhouse, a passive solar greenhouse, for local farmers. 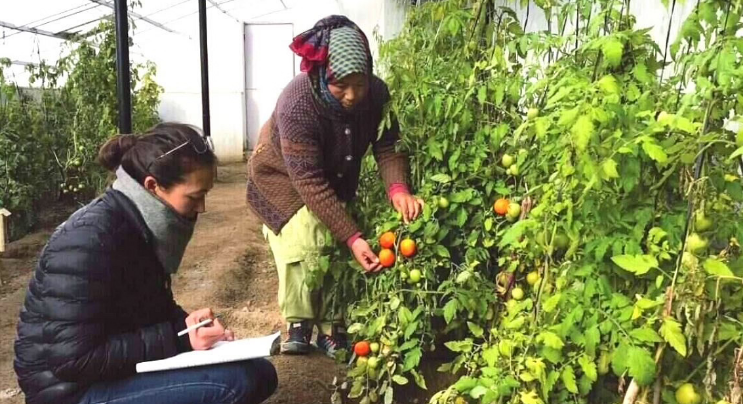 “We studied the positives and drawbacks of traditional greenhouses, which are used extensively in Ladakh. Accordingly, some major changes were made. We replaced the polyethylene sheet with a triple layer polycarbonate sheet. This results in over 7-8 degree Celsius increase in temperature at night during the winter season since polycarbonate has much better insulating properties. Second, the unbaked mud bricks were replaced with stone walls since the latter has more heat absorbing capacity. The heat absorbed during day time is released back into the greenhouse at night. Third, we have constructed the greenhouse three feet below the ground level. Therefore, the ground heat helps in keeping the greenhouse warm in winter.

“The general perception is that the smaller the greenhouse the better is its heat retention capacity. However, we found that the reverse is true. Easily hand operated ventilators in these newly designed and developed greenhouses make it easy to regulate the temperature during summer months. Inside the Ladakh Greenhouse, the maximum temperature recorded is 45 degree Celsius  (113 degrees F.) in summer months. The lowest temperature recorded in peak winter months is 1 degree Celsius (34 degrees F). That’s the reason why tomatoes are growing inside the greenhouse. Moreover, it is easy to operate. There is not even a single electronic gadget that farmers have to use here. It is entirely a passive solar greenhouse,” explains Dr. Stobdan. 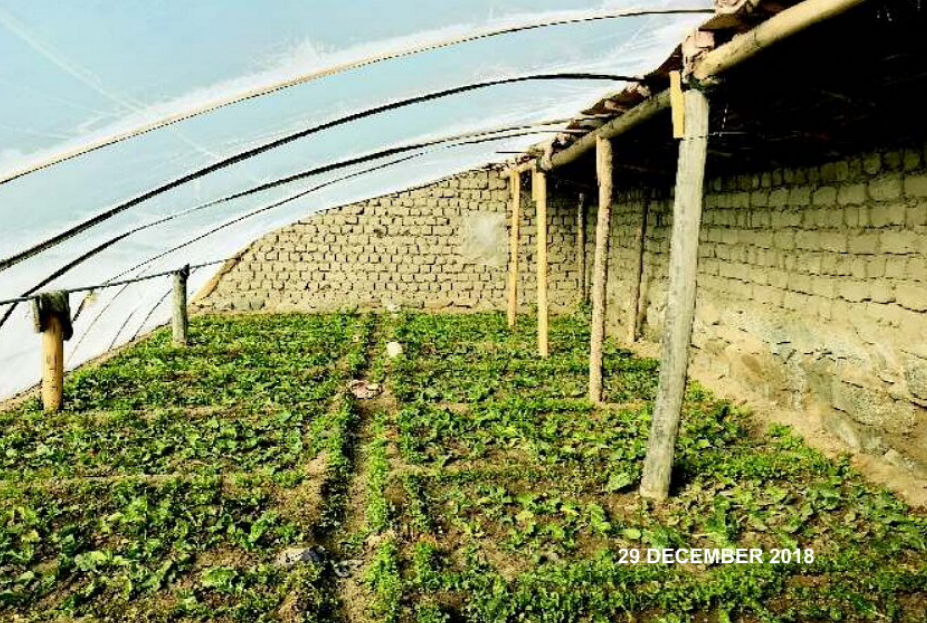 “We started working on this greenhouse in 2014. It took us three years to develop the first functional prototype. Our criteria for a functional greenhouse is growing tomatoes, a highly temperature-sensitive crop during winter seasons without any external heat/power source. In December 2017 we grew tomatoes inside the greenhouse for the first time. The new design was then studied further during the winter and summer for growing a variety of vegetables in Leh Ladakh. Our successful trials led to the designing of improved greenhouses of different sizes to meet varied farmer requirements based on availability of land and resources,” says Dr. Stobdan.

According to a document authored by nine researchers in 2019, some of the salient features of the new and improved Ladakh Greenhouse include the walls on the east, west and north sides built with stone and cement, which they argue requires minimal maintenance. “The wall on [the] north side inside the greenhouse is used for fixing racks that can be used for different purposes. An outer mud-brick wall with insulation in between the two walls has also been studied,” explains the document. 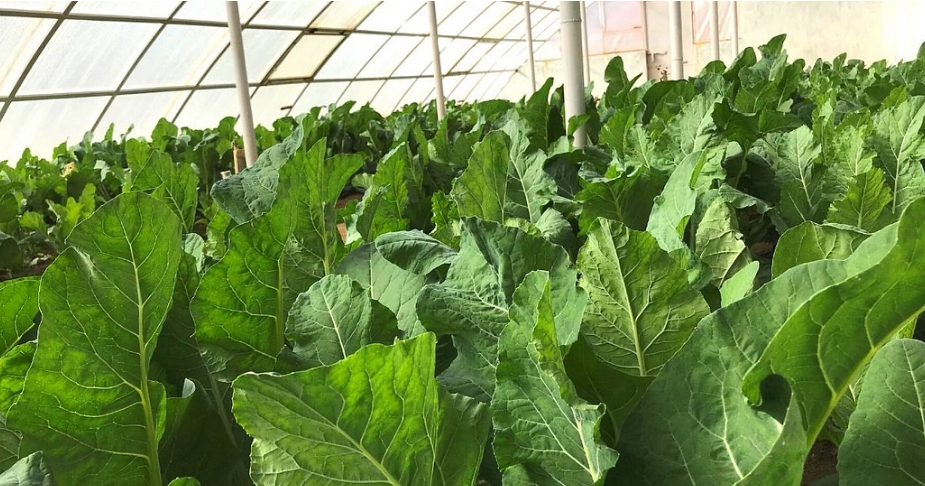 The second element to the new Ladakh Greenhouse is the use of “transparent UV stabilised triple layer polycarbonate panel is used for covering the south face of the greenhouse,” which they argue “has better heat retention capacity” and “retains an acceptable transparency even after 20 years of exposure to harsh climatic conditions of Ladakh”.

Another change to the earlier iterations of the old passive solar greenhouses is the use of sloped (to the north) Polyurethane Foam (PUF) roof which is durable, “has better insulation properties as compared to conventional wooden roofs” and “does not allow growth of molds and fungus”, which is a major concern in conventional Ladakhi greenhouses with wooden roofs.

Besides employing PUF, the other option is to go for a rust-resistant pre-coated “GI sheet topped with a layer of hay and soil as insulating material is also used for roofing”. Then, there are metallic or polycarbonate doors on the east wall that require very little maintenance and manually, but easily operated, ventilators with metallic frames as well. 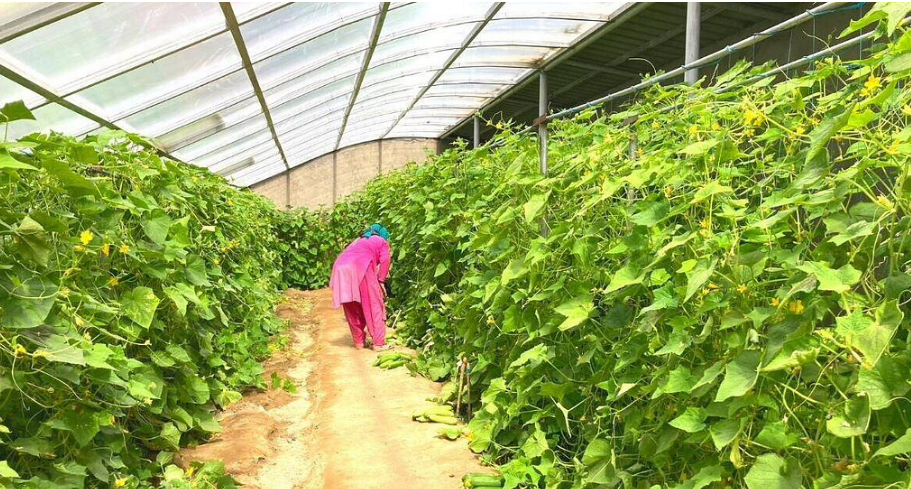 “A variety of crops have been successfully grown inside the greenhouse during winter months— cauliflower, cabbage, broccoli, knol-khol, tomato and even mushroom. In a medium greenhouse one can obtain up to 325 kg of cauliflower/ greenhouse; 398 kg cabbage/ greenhouse; and 231 kg knol-khol/ greenhouse in Leh. These crops cannot grow well in traditional greenhouses. In the winter months, a variety of crops can be grown, which otherwise is not possible in a traditional greenhouse. During the summer months, a crop like cucumber would ordinarily enjoy a harvest from August onwards in the open field. Grown inside this greenhouse, however, harvest comes earlier in June, and we enjoy a higher crop yield of 4.5 kg per plant as opposed to 1.6 kg per plant on the open field — a 3-fold increase in crop productivity,” says Dr Stobdan.

In the long run, the objective is to reduce dependence on fresh vegetables from outside the region — both during summer and winter. For this, the Ladakh UT administration’s target is to establish 1,000 greenhouses in Ladakh, including Leh and Kargil district, in the next two years.