Some years ago I noticed a house in the middle of the road. I didn’t remember a house being there and thought that I was seeing a strange mirage. The closer I got, the more real it appeared, until I was forced to slow down and drive around the thing, at which point there was no doubt about its authenticity.

A big truck tractor was towing this entire 1200 square foot house balanced on two huge steel I-beams and a bunch of wheeled dollies. Progress was slow but steady as it inexorably moved toward its next incarnation. Just that morning it had departed its original home where it had been seasonal housing for migrant workers. 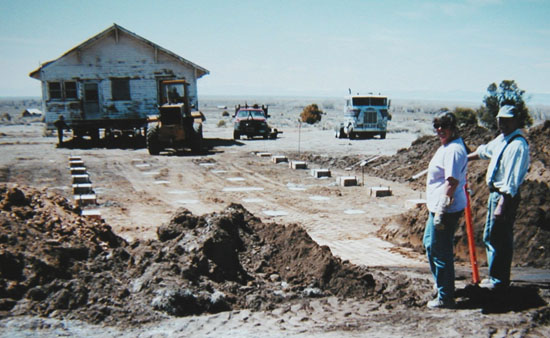 Ann Bunting and Tom Dessain had searched for just the right orphaned house to adopt as their own, lovingly place on a new foundation, and refurbish. Many houses would not be suitable for such a trip; only well-built wooden structures can withstand the stress of such a move. This house had all the qualities they were looking for: charm, integrity, and affordability. The entire cost of the house and having it moved was $10,000.

By the time they had it completely fixed up with new plumbing and electric service, an insulated stucco exterior, new energy-efficient windows, a metal roof, a completely rebuilt front porch, all of the interior walls resurfaced, and miscellaneous repairs, the total cost of the project was about $50,000, including the land. Not bad for what in most regards will be as good as new! 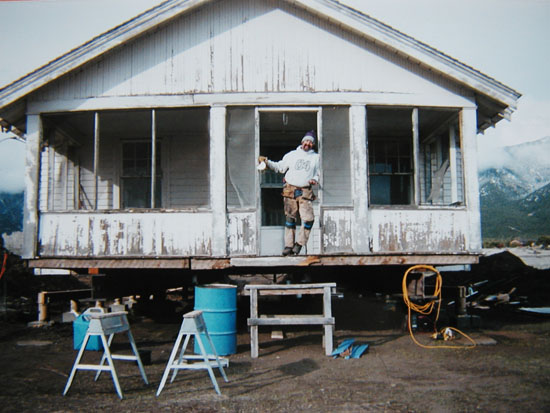 Of course new is not what they wanted; they bought this early twentieth century house (it’s actual date of construction is unknown) precisely because of its special vintage quality. It reminds Tom of the house his grandmother lived in, with 9 foot ceilings, three smallish bedrooms, tongue and grooved fir flooring, cast-iron radiators, built-in cabinets, drawers and even ironing board, and the intangible quality of a by-gone era. They plan to retain the original floor plan intact, only altering a walk-in closet to become the mechanical room and turning a room off the kitchen into a dining space.

The house made the entire trip with just a few places where the plaster cracked in one corner, which is easily repaired. This is one very solidly-built house, made from the sort of fir that no longer can be bought. There was only one place under the kitchen sink that had suffered leak-induced rot over many years; everything else is as straight and true as any carpenter would want.

Five years ago Barbara Hoeppner was led to adopt a house from Fort Garland. Through a series of fortuitous events, she purchased the perfect lot for $1,000 and then noticed an ad for a house to be moved for $7,995. She asked Gary Olson to help her inspect its condition, and they agreed that it would be suitable for moving onto her lot. She hired Bob Hansen (the eighty-something-year-old who also helped move Tom’s house) to transport her new purchase. Barbara knew that the house was not insurable until it was set on a new foundation, so she kept her fingers crossed. 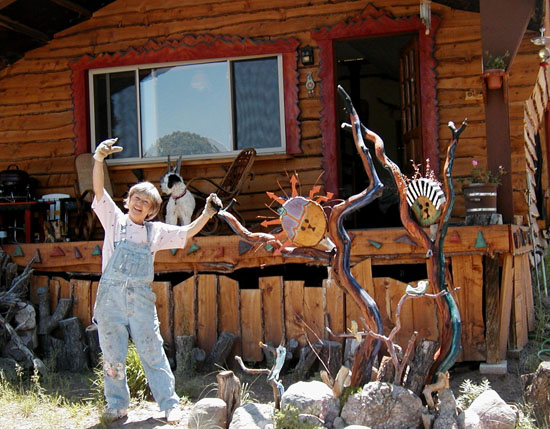 This late twentieth century vintage second home of about 800 square feet came from property leased from the Federal government and so it needed to be moved. Barbara, with the help of Keith Conway, added an additional room onto the original to comply with the Baca’s 900 square foot minimum. She has thoroughly enjoyed the process of remaking this simple cabin into her charming home, imbued with the wonderful quirky qualities that spring from her fanciful mind.

Once a house is moved it must comply with current plumbing and electrical codes, so these elements were completely redone. Most of the windows were replaced with second hand units that gave her just the views that she wanted. The exterior was resurfaced with rough-sawn lap siding and a new metal roof was installed. The original interior plastic paneling was replaced with sheetrock, and decorated with lots of natural wood trim. The whole feeling of the place is one of lovingly crafted touches wherever the eye lands. Barbara says, “I would much rather live in something recycled than buying something brand new which has no character. I let this house come together. It just evolved!”

Creating new life for old or abandoned houses has got be one of the most sustainable ways of making habitation. This is the ultimate form of recycling, where most of the basic components of a house are utilized intact instead of being tossed into a landfill or burned. There is a tremendous savings in the embodied energy of the house (in both materials and labor), so that all that needs to be done is to repair and polish the original dwelling to create a whole new life for it. Hoorah for these people who have the vision and willingness to take on these projects!