Sometimes people send us emails asking specific questions about their personal projects, and we usually try to help them as best we can. Not long ago we got the following email with several photos attached: 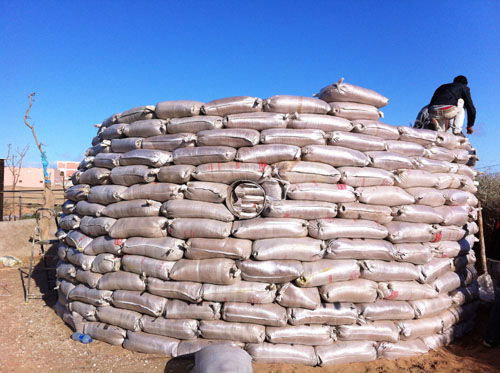 I came up with the idea of building my own dome here in south Morocco where I live. I got some refurbished polypropylene bags and decided to do a 5m diameter dome to provide a shelter for horse food and equipment.

I decided to use the soil from our garden which is very close to sea sand. Since this was an unstabilized soil, I decided to tie the bags very firmly at the top to prevent any sand from slipping out, and also damped the sand so it could be tamped better. I dug a trench down to half a meter that I leveled with double bags filled up with small rocks, and then started the courses of bags, with two barbed wire between each course. We went up to half a meter straight, and then started to corbel the bags inwards. We have been working for two weeks now in a team of four, and it’s getting quite high. I wasn’t planning on doing a loft, since there would be no use of it for me. I’m getting a bit worried as we are working at higher levels that the whole thing might collapse, so I thought I should give it a try asking your advice. It feels quite strong while working on it, but when tamping, you can really feel the strikes wherever you are placed up on the wall.

So here are my questions : Is there any thing we’ve done wrong that could lead us to failure ? Could I keep on going like this without adding a loft ? Should I worry about the sand getting dry and the whole structure collapsing (I guess the first rows must be dry by now, and it hasn’t move yet). Is there a limit to the angle we should go for corbeling the bags ? Is 60° alright? 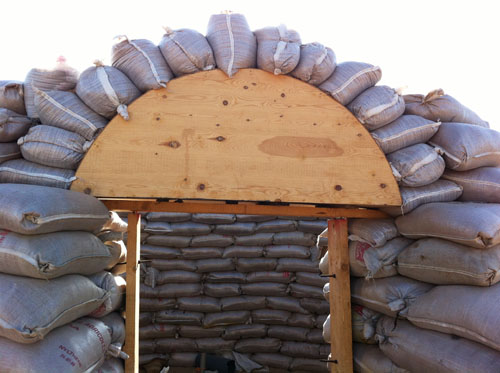 The arch we made above the door frame is slightly bigger than the door itself, is that a problem ? Also, can you see any bad things about the arch itself? Should I be able to release the arch form without too many problems?

So here was my response:

I’m glad that you are trying your hand at making an earthbag dome, and generally it looks pretty good. I do have some concerns though.

It really can help stabilize the dome to have a loft, or at least some beams that tie across the dome at approximately loft level. They don’t have to have a floor over them, but creating such connection stiffens the whole structure noticeably, and actually gives you a support to stand on for building higher.

I am concerned with the fill being loose sand. Some sand will not hold its shape well even if tamped when damp. Ideally there would be some clay mixed in with the sandy soil that will really harden and hold the fill together when it dries. I have had several domes fail because of this problem. If your soil is packing reasonably well, then maybe you will be OK. Once the bags get mesh and plaster on both sides, this will also help stabilize the structure. It is not unusual to be able to feel vibrations around the entire wall when you tamp; in some ways the indicates that the whole form is acting as a monolithic unit.

The first sign of impending collapse is if you notice any deformations of the walls as you proceed. If this starts to happen be careful to not place workers in harm’s way.

Another concern I have is with the arch over the door. The arch form itself is fine, but the bags placed over it appear to be rather loose and not well compacted into a shape that will resist slipping downward. Ideally you want each bag to be tapered so that it will lock into position and cannot slip downward. I suggest that you take the time to do this more carefully now. You certainly don’t want to have anything slip when you remove the arch form!

Generally the bag placement is pretty good, but you could pay more attention to laying the bags over each other like bricks to make a stronger wall.

I then got this email:

So I think I will go for some beams on top of where we are now. Is there a minimum number of beams it requires to be efficient? Would fairly straight eucalyptus branches do?

As for the fill, i did some testing and the bags did hold their shape for about a month, so I was hoping to get this finished by another 10 days and hire Some extra workers to get the mesh and stucco done right away. The only main problem I have had is for the bags of the columns, that tend to slip downwards when there is not enough weight on top of them.

Concerning the arch form, is there any way i could test it without having to release the form? Do I have to remove all the bags? Or could I just focus on the 5 five center ones?

I Will try to pay more attention to placing thé bags more like bricks, and maybe use a bit more “half-bags” to get it right.

So I wrote back:

I would go with at least 3 beams…more would be better. If you use branches, I suggest at least 10 cm diameter. Some slumping of the ends of the column bags is common and is not a structural problem. You can fill in the spaces  when you do the plaster work.

Looking at the picture of the arch, I suggest removing the top 8 bags and reshape them so that they are higher  and narrower and more pointed toward the base where they contact the arch form. I know that this is not that easy to do, but if you carefully tamp each one in place into a proper shape it can be done. You might need to re-moisten the fill. You can probably slip at least one more bag in there if you do this. There is really no way to test the strength of the arch without removing the form.

A final email shows why this blog post is tilted, “A cautionary Tale”:

Unfortunately, we had to experience our dome collapsing yesterday…. That was a big disappointment for us all but the main thing is that no one got hurt…we managed to jump out on time.

So, that was right before we were gonna put the beams on. I noticed in the morning that a few bags three or four rows below tended to slip inwards quite dangerously. I had another go at  the rope we used to measure, and noticed that they were all a bit too much inside! So i decided to take out the 3 top rows, and do it again, but as we were pulling out a bag, it all collapsed.

My main concern is that most of the bags that fell off are quite damaged because of the barbed wire, and I think I won’t have enough to finish up the dome. I think the 5 bottom rows are still OK. They feel like they haven’t moved.

So I am planning on starting again from the 4th row, and maybe going straight up to around 2m50, and then place Some beams and put a roof on it. Do you think that would work? And do you have any ideas of nice roof that could be handled by the bags?

Thank you so much for your time and patience. I think I will try to do a proper dome later this year in a place where the soil hold itself better, and when I’ll manage to find some bags that aren’t too expensive!

I’m so sorry that your dome collapsed…but at least nobody was hurt. Yes, I think that you could go up vertically from the bottom five rows and be safe enough. There are lots of options for a roof over a round house like that. See this project for one example. Or this one or this one. It is even possible to make a flat shed roof if you taper the bags on the top enough.

Good luck with this.

5 thoughts on “A Cautionary Tale”