“My family name is JONES so I’m a Welshman, five generations removed. Seeing these incredible creations is inspiring. I bought a small mountain in the High Desert of SoCal (part of the greater Mojave Desert) sixteen months ago and have now built three structures on it. The first two were rock and cob only but the third is a post and straw bale construct built into the side of my mountain using large boulders for the walls with a stone foundation from the site on the fourth wall topped with straw bales. I have done this entirely by my hand with no power tools, using sand and dirt from the site with donated lumber and clay I have dug from the dry lake a mile west of me. I have used boiled linseed oil to water-proof the exterior and harden the floors. The interior has parts of a donated piano made in London and sold in Scotland. I have been working in triple-digit temperatures but even though the house is still open the interior is much cooler than outside. When finished and enclosed it will be a constant 65 degrees year-round. I have a cooler buried in the ground that maintains 50 degrees inside with no ice. Aye, the old ways still work. I am proud to be a cobber today and a Welshman as well, stranded as I am in the Mojave Desert of SoCal.”

When I read this, I wrote back to him and asked if he would be willing to share more about his projects with blog readers. He agreed, and has provided these details:

Quick background on this project, which I have called Cliff House. For many years I had a dream of building a house against a cliff using the cliff itself as an inside wall with two other walls coming out from it as earth berms and the fourth wall a traditional frame construction. Not unlike many walkout basements in the US.
I moved to the High Desert ten years ago and my wife and I live in Apple Valley in a conventional 55+ community. I began looking at building sites here six years ago and in March of 2020 found the site that felt right. I walked around it and pondered for two days before returning and walking it a second time. I called the listing agent and 30 days later owned it.
The site is 3.3 acres sitting on the main highway going into town and was part of a 320 acre homestead filed in 1926. There had been a house there since that time which was added to and extended. It burned down in the 80’s and a pile of debris and foundations and walkways were all that remained. Most of the area is a mountain but there is a large flat area with a 145′ driveway between the mountain and the highway. I had no interest in the flat portion.
The first six months I spent clearing rocks and dirt from the area in front of the cliff to form a footprint of a 1700 sq. ft. house with the cliff as the north wall, a large boulder at the SW corner and another at the SE corner. Those three walls fit my original plan and I drew a 60′ line between the two southern boulders to form the foundation for the fourth wall.
By now I had been reading the Cob Bible The Hand-Sculpted House and knew the foundation was critical and should be at least 18’x18′ of stone or concrete. Because I had such an abundance of rock my south wall foundation was mostly 5’x5′! I still had tons of rock to find a place for and after uncovering a flagstone patio that had been buried in a foot of runoff dirt I began lining it’s edges with rocks stacked to firm seating. I also formed foundations atop the east and west walls that could be topped with straw bales to even them out for a roof.
All the time I was doing this I knew that I would have to pull a permit with the county and present plans for a house but I had no way of drawing up plans for this because of the uncertainty of the site. I had thirty sets of plans I had made for my cliff house but they supposed a flat plain in front of the cliff. I left several boulders inside the house that were too large to move.
In reading the county building code I found that I could make a structure of <120 sq. ft. without a permit as long as it was not called a house. It could be fully wired and plumbed with kitchen and bath and I could spend the night in it as long as I actually had another address to call my house. And…there was no limit to how many of these non-houses I built as long as they were not within 50′ of each other and were unconnected.
My first structure was a two-wall surround of the original kitchen floor that survived the fire. The north wall was a counter with a pizza oven and single burner rocket stove and tile tops on the counter. I sealed it all with linseed oil and it has survived two rainy seasons of hard rain with no loss of material.
I then built my first non-house atop the main cliff looking down on the original site I cleared for the main house. I called it the Starroom because it has no roof. I built a cob bed for two at the base of the cliff above it and a built-in table and bench. It has two doors, one round to match the round window facing south and the highway. Quite visible.
The next structure was Sunset House, which I am now finishing the roof on and have already started on the floor. I have decided to not build the main house and just do small houses within permitted guidelines. I already have a good start on the fourth structure, as yet unnamed.
My material costs have been $600 for 50 bales of straw from the feed store down the road and $200 for 12 gallons of linseed oil. Everything else was taken from the site itself, including the debris from the original house, and donated used wood both milled and dead trees and trimmings from fruit pruning. There is no concrete or cement, nothing artificial. The clay is dug from the dry lake a mile away. 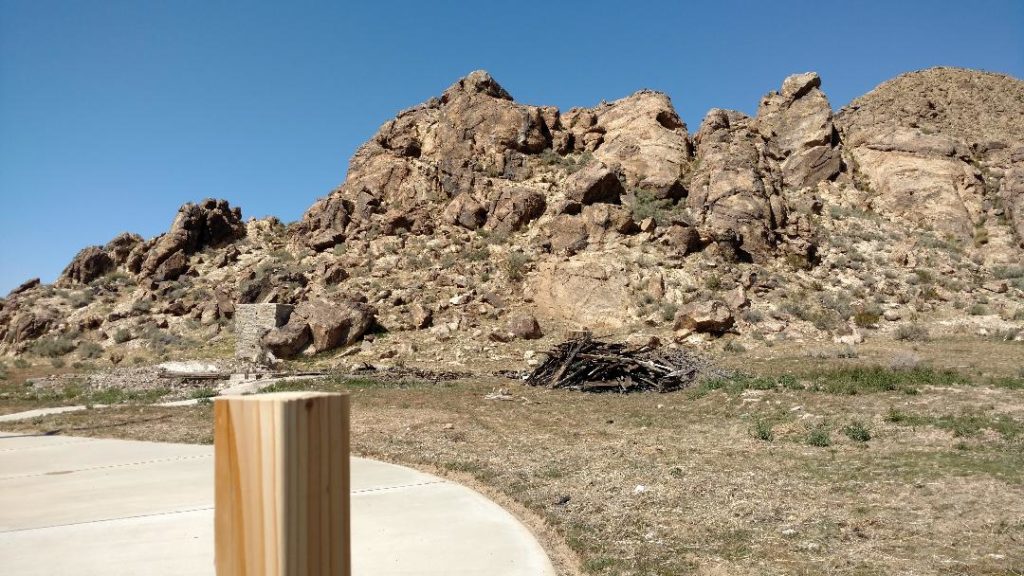 The first picture is taken from the highway looking north after I had cleared the weeds from the lot last March of 2020. You can see the cliff that caught my eye and the pile of debris left from the house burning down in the 80’s. 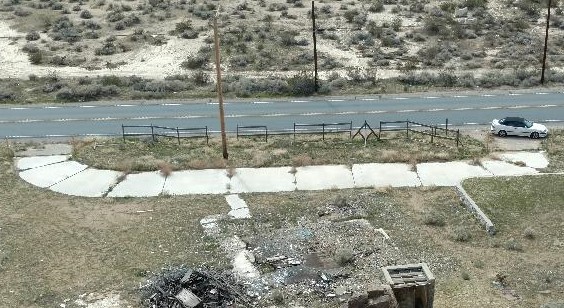 The second picture is looking down at the site from the top of my mountain and shows the driveway and the state highway. 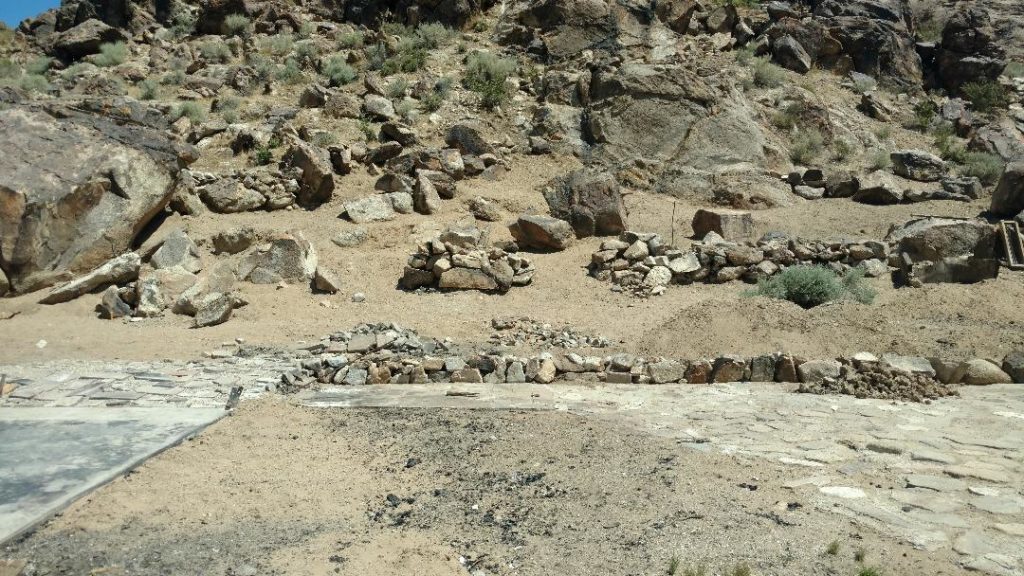 The third picture shows the site looking north with the main house footprint excavated and the south wall foundation in place, the flagstone patio uncovered and the bare flat spot on the left where the outdoor kitchen and pizza oven will be built. 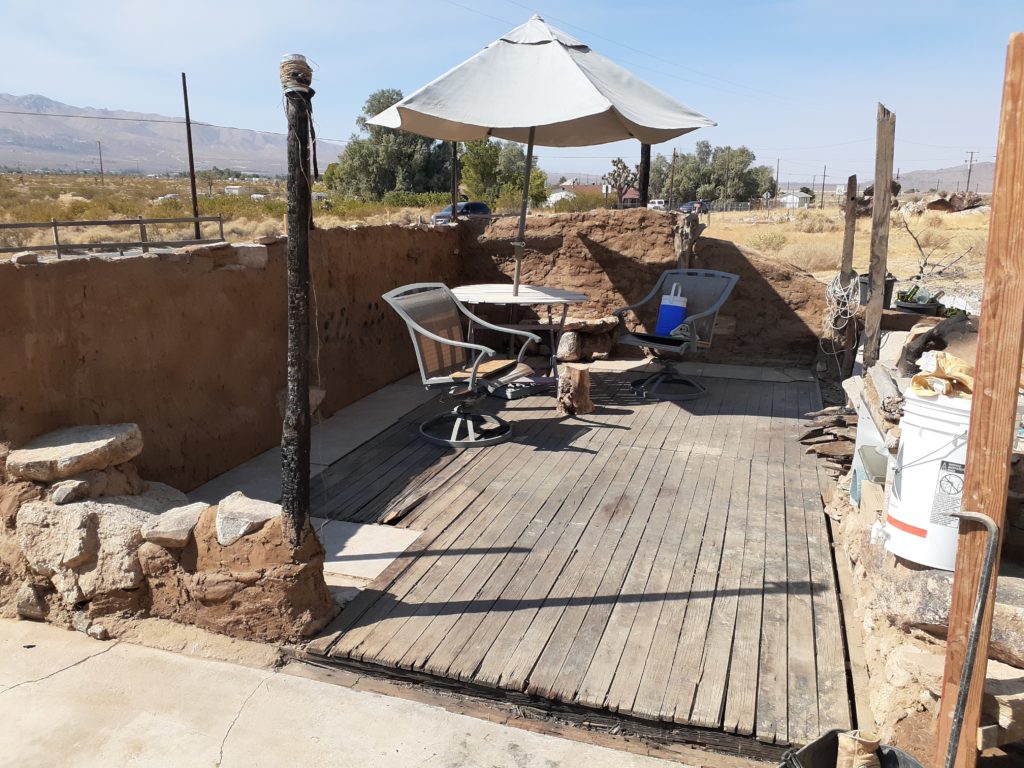 The next picture is the outdoor kitchen and oven with two sheltering walls. 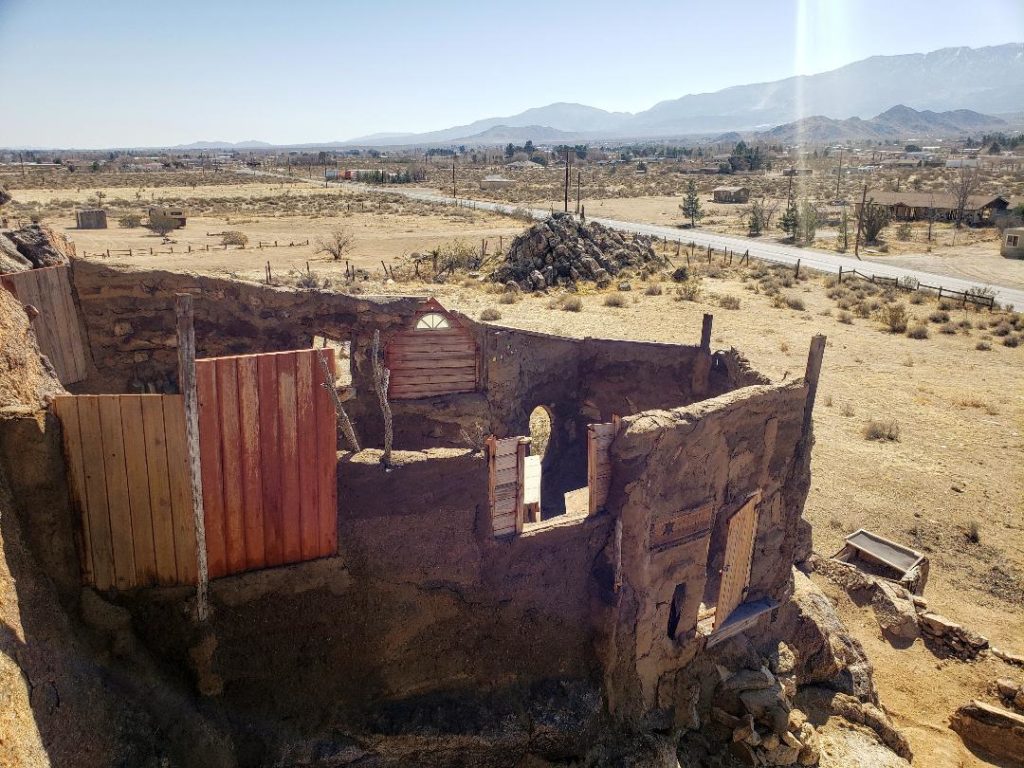 The fifth picture is the Starroom built atop the main cliff, shot from the west looking east. It has two doors but no roof. Both doors were designed for people under five feet tall. 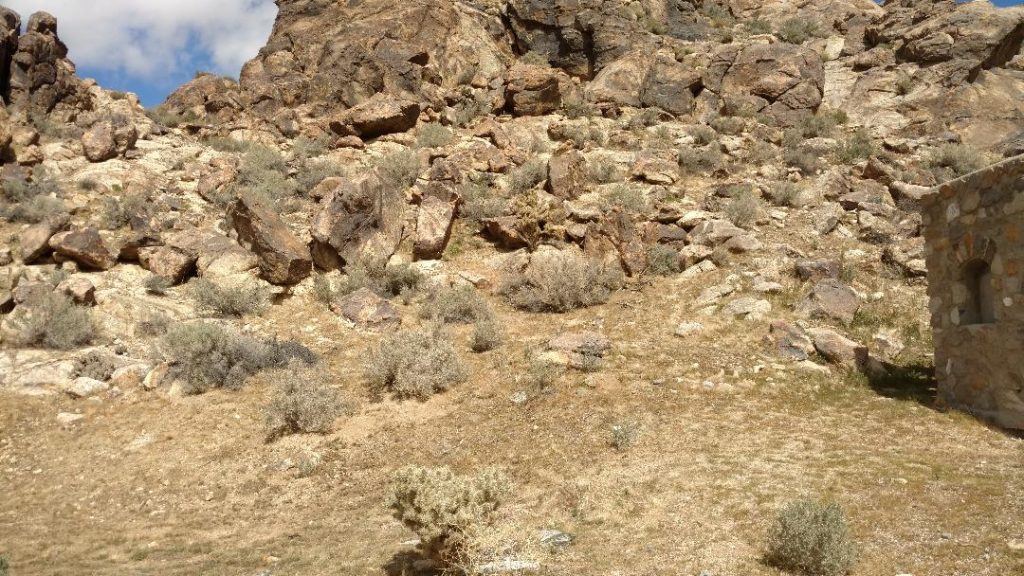 This pic is the site of the Sunset House, west of the main house. Less than 120 sq. ft. with many windows including two roll down windows in doors from a ’96 Dodge Ram pickup. Crank windows were last used in ’97. I paid $50 for these two doors but had no idea I could have gotten doors half that size in other cars or trucks. The Dodge Ram has the biggest doors ever made! The two doors are on the south and the west walls and are the only two windows that can be opened. 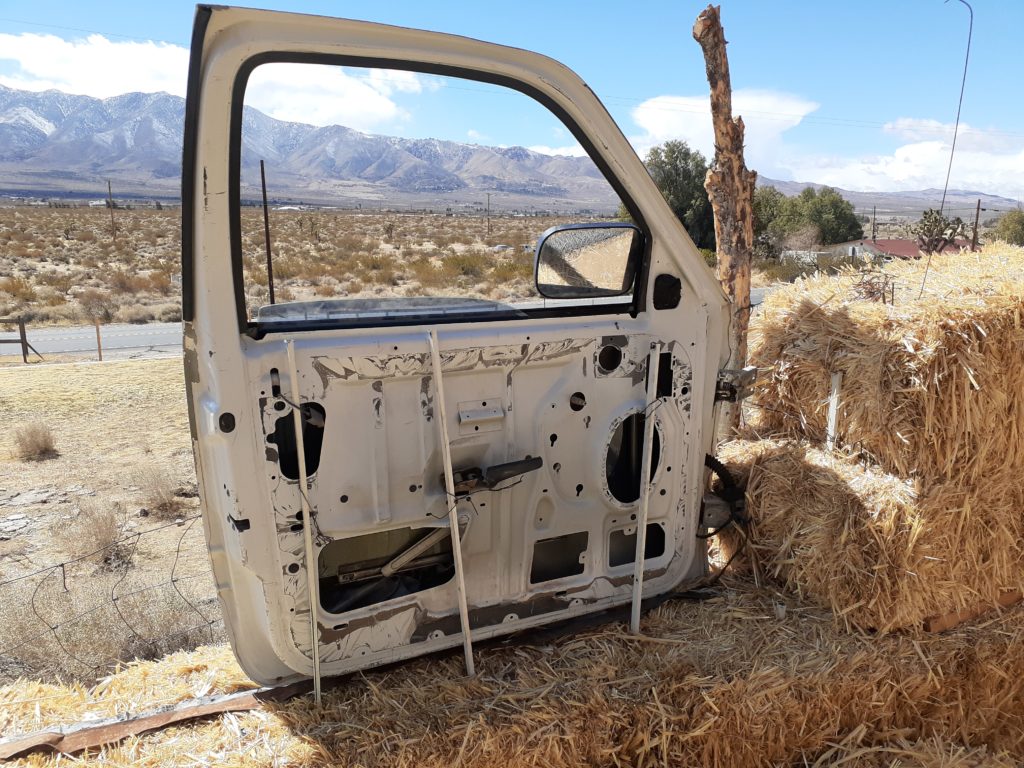 The second pic shows the south door in place on the straw bales. You can also see the steel rods I used to nail the bales together. They were from an old E-Z Up pavilion I used for street fairs. 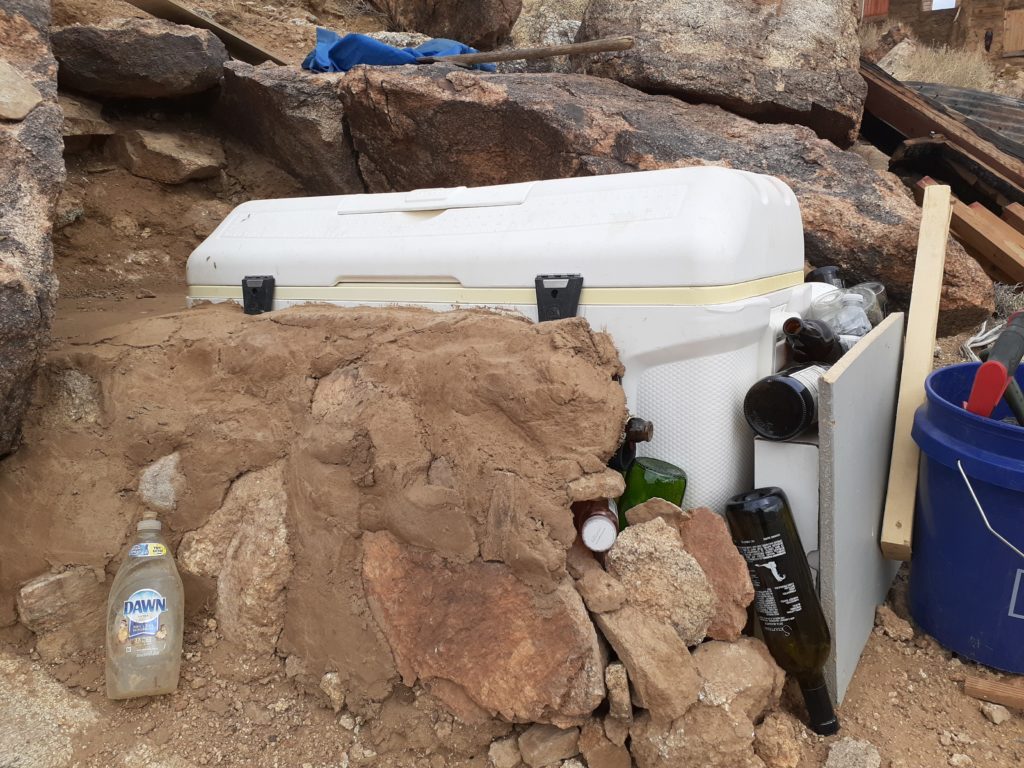 This is the cooler my friend Gary found for me that is buried in the east wall on two sides going back to the mountain and the other two sides have a layer of wine bottles covered with stone and cob. It lies in the pantry which is five feet higher than the main floor, reached by a small ladder. 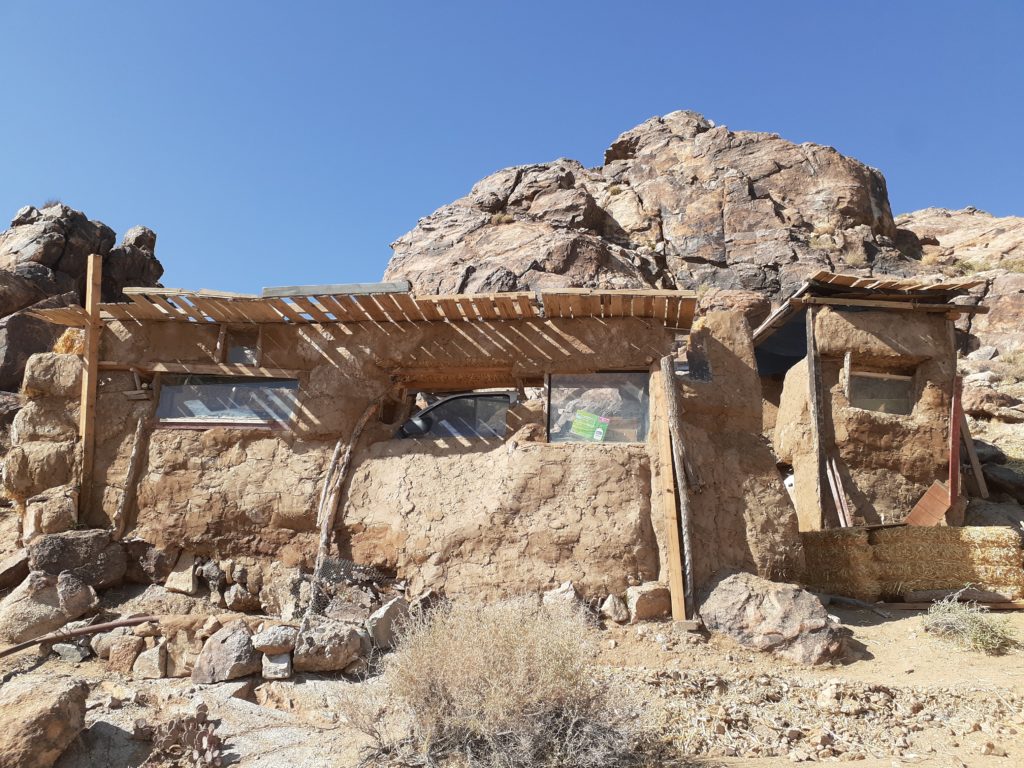 This is pretty much how Sunset House looks now. The south wall is straw bale on a large stone foundation and the source of the greatest heat gain. I used pallets for the overhang to shade them and on the west  truck window. I put a cob floor in the reading nook and the pantry six months ago and the floors show little wear. Sealed with linseed oil and hard as concrete.
The interior clearly shows the original boulders I used and filled in with rocks and cob to seal from the outside. The entire house is shielded on the hillside from rain runoff with trenches and rock drains.
There is little rain in the Mojave Desert but when it comes it is hard and brutal. I have been there through two rainy seasons and know where the rain goes.