A group of homeless people and activists have built their own unsanctioned community center from the ground up — creating a kitchen, shower, toilet, health clinic, and free store in Oakland, California. The grassroots project is expanding the limits of what a homeless encampment can look like.

The community center, located in the heart of Oakland’s largest homeless encampment, looks like something out of a fairy tale. Wind your way through a maze of trash piles, burned-out RVs and junked cars, and you’ll emerge into a collection of tiny cabins with round, stained-glass windows, the walls covered in hand-painted tree branches and colorful flowers. 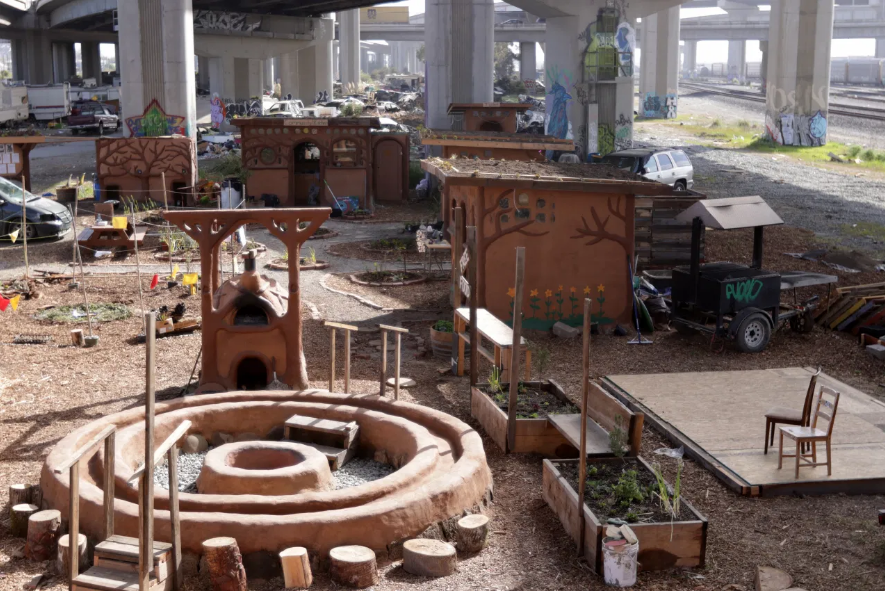 Each cabin provides a free service for the dozens of un-housed residents who live in the massive camp  under a freeway overpass. There are amenities to meet people’s basic needs, including a shower cabin with hot water and a kitchen with a propane stove and stocked refrigerator. But there also are things built just for fun, such as the pizza oven, the communal fire pit and the stage for open mic nights. 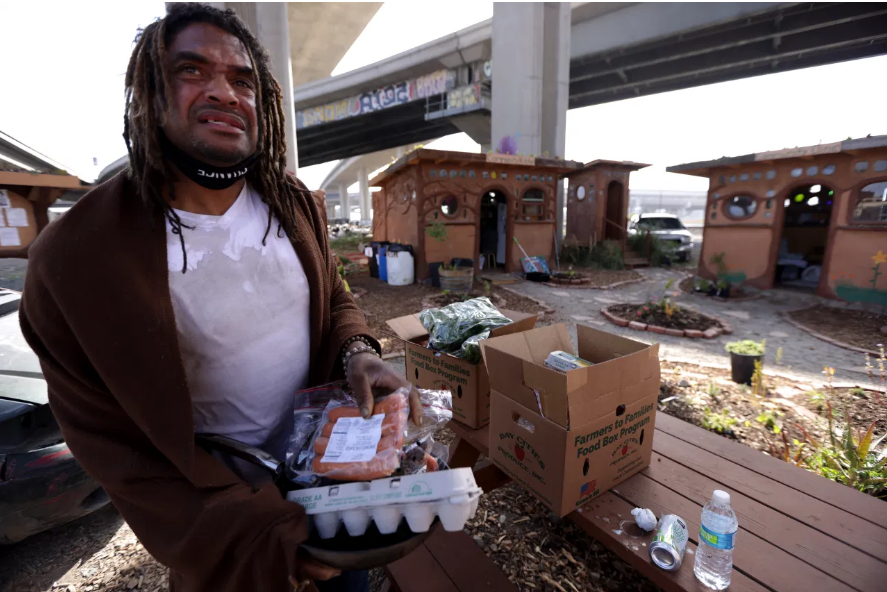 “It’s sort of like a little oasis in the middle of nowhere that makes you feel like maybe you’re normal again,” said John Janosko, who lives in a trailer in the encampment.

But like all make-shift structures in an unsanctioned encampment, the cabins could be bulldozed at any moment. The organizers don’t have permits from the city, nor do they have permission to be there from Caltrans, which owns the land and has a long history of removing encampments along highways and in other areas it manages.

“The structures were placed on state right of way without a permit or without any safety inspections,” Caltrans spokeswoman Janis Mara wrote in an emailed statement. “Caltrans is currently evaluating the best course of action and has no immediate plans to remove the structures.”

The cabin project is a joint effort between un-housed residents and three grassroots activist groups: Living Earth Structures, Essential Food and Medicine, and Artists Building Communities. The organizers, with the help of hundreds of volunteers, framed the cabins with wood from pallets, insulated them with trash found in the camp, and then plastered the walls with cob — a mixture of earth, sand and straw that has been used to build homes for hundreds of years.

They hope to expand the program, dubbed Cob on Wood, ideally in partnership with the city. They envision a program that trains un-housed people to make tiny homes out of cob as a solution to Oakland’s homelessness crisis. 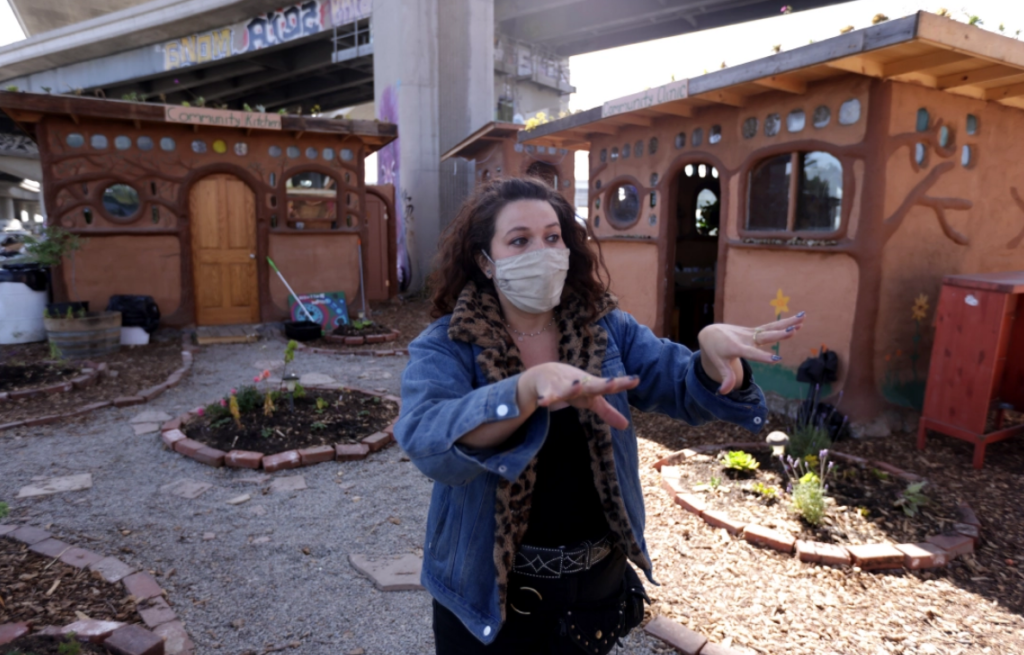 “This place and what we created can serve as a model for other encampments across Oakland, across the nation and across the world,” said Xochitl Bernadette Moreno, co-founder and director of Essential Food and Medicine, which has been providing healthy food and holistic health services — such as herbal medicine and acupuncture — to residents of the Wood Street camp since last year.

A GoFundMe page dedicated to the cob community has raised more than $22,000.

Oakland officials are drafting new rules that could expand permitting options for alternative housing, potentially including structures similar to the Cob on Wood cabins, according to Darin Ranelletti, Oakland’s policy director for housing security. He expects the new rules will come before the Planning Commission in the coming weeks. 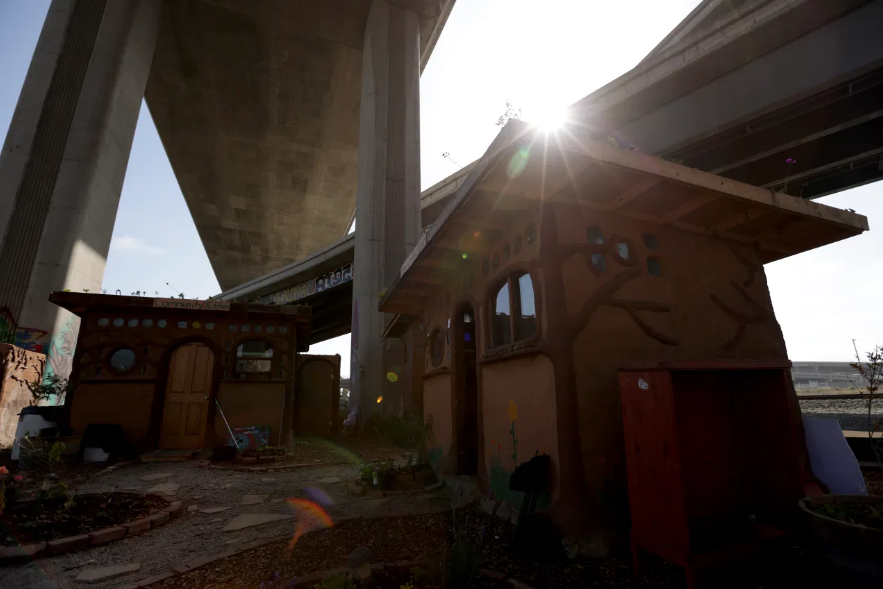 The vision behind the cob community started when Living Earth Structures founder Miguel Elliott built a cob pizza oven in the encampment and threw a pizza party for residents. That led to organizers speaking with residents about their need to cook and store food without running the risk of fire —  a constant threat in homeless communities.

The following month, Elliott started work on a community kitchen. Now, residents can cook a meal or raid the fridge whenever they want, day or night. The kitchen has solar power and running water (the sink is hooked up to a water tank outside). Donated food stocks the pantry shelves and fills the fridge.

The cob structures are fire-resistant, according to the organizers, though they haven’t received an official safety inspection. 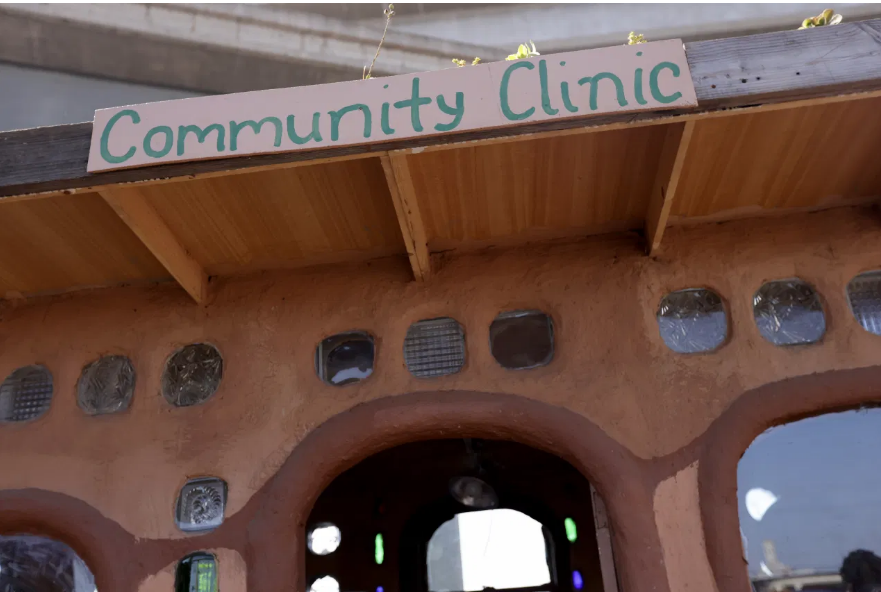 On Sunday, the organizers opened the Wood Street community clinic — a medical cabin where residents can find everything from herbal tinctures and sage bundles to diapers, condoms and Narcan, the nasal spray that reverses an opioid overdose.

Next door is the “cobissary” — a free store where community members can take their pick of donated clothing, shoes, water bottles and other essentials.

And last week, the organizers finished the community shower, an amenity that will be a highlight for many residents, including Denis Emery-Young, who lives in an SUV in the camp.

Emery-Young’s eyes lit up when Elliott told him the shower had hot water. “Oh my God,” he said. “I’m going to be next in that.”

In addition to the cob community buildings, volunteers also are building tiny homes where people can live. Artists Building Communities has built four wooden, one-room homes in the Wood Street camp, and is fundraising to build more. 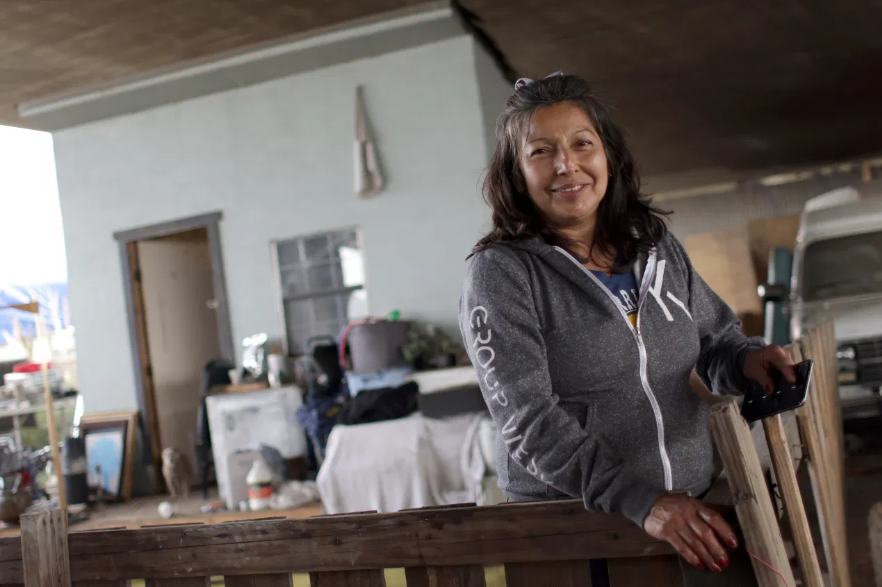 Kellie Castillo and her dog, Little, moved into one of the tiny homes earlier this year. Before that, she had been living in a van. “You feel a lot safer,” she said of her new home.

The tiny homes and cob cabins also serve as a form of protest. By building permanent structures without wheels, the organizers are saying residents have a right to stay in their encampment. The organizers have started a petition, which has more than 300 signatures, to pressure Caltrans to let the camp be.

“We shouldn’t have to move,” said Annmarie Bustamante, co-founder of Artists Building Communities. “There are no other options for them. Let them stay here until there’s a real alternative.”

All photos by  Anda Chu/Bay Area News Group. You can read the original article at www.mercurynews.com

There is another great article about this at www.theguardian.com

2 thoughts on “Cob on Wood Homeless Community in Oakland, California”