Skip to content
One of the great assets of Canada’s Cowichan Valley is the Centennial Park Cob Kitchen. It’s a beautiful Cob pizza oven and cooktop available to the community. The Cob Kitchen can be used by individuals for family use, community organizations who wish to host an event or program, or by local businesses. 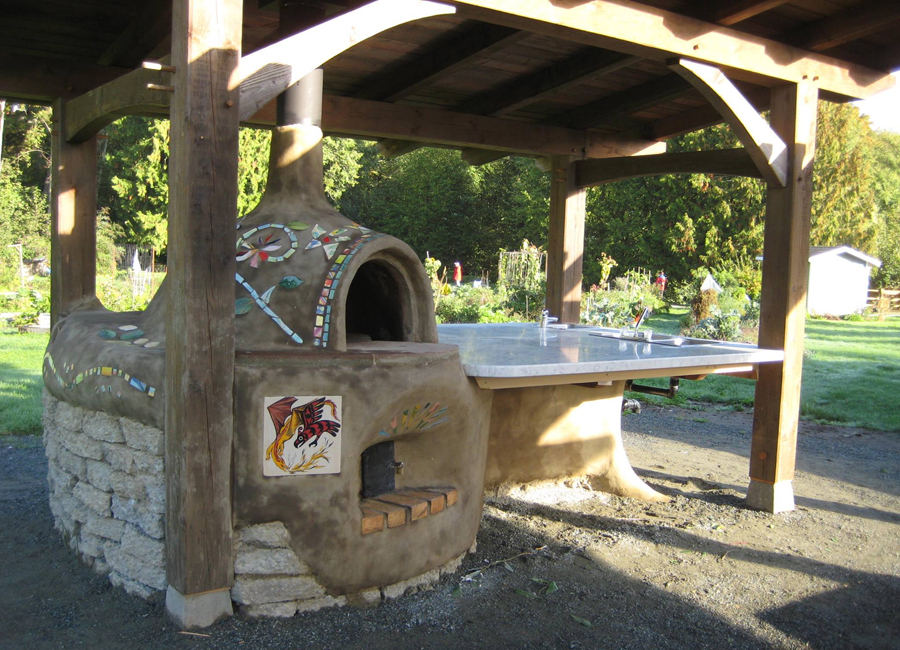 Having heard that the future of the cob kitchen in Centennial Park was in question, Pat Amos (the designer-builder) thought he should add his perspective. The idea for an outdoor community kitchen had been circulating for years. A team of rag-tag artisan builders were working alongside the City of Duncan staff, making plans and breaking ground. That made for an uncommon synergy. Not everyone in the community thought it was a good idea at first. But the more things took shape the more support for the project grew.

The intention was to involve community into the process as much as possible. With natural building materials such as clay, sand, straw, and old clay bricks people of all ages could have a hand in making things happen. Sculptors, timber-framers, potters, storytellers, workshop facilitators, plumbers, and natural-builders all joined as volunteers.

An elderly woman who had grown up in a Ukrainian community in Manitoba said every weekend the women of her village would gather round the big wood-fired clay-brick bread oven to bake the coming week’s worth of bread for all the households in the community. This offered a time for people to catch up with one another, hang out, share, and offer/receive mutual support as needed — all while attending to the most basic need of putting food on the table.

Some people donated encouragement, others bricks, others slabs of marble, chimney components, plumbing supplies, decorative tiles.  The biggest gift was witnessing people of all ages get the clay onto their hands and feet, therein rediscovering a state of being in which the primordial meets the prime ordeal. Accessing ancient memories whilst manifesting shelter and generating warmth.

When a group of well dressed kids wandered over to see what was going on, they soon zeroed in on the little clay mixing pond, made of straw bales covered with a tarp, and the big slurry of clay and water waiting to be mushed together by foot.

The look on their faces was 100 percent curiosity and the look on the parent’s faces was 100 percent alarm! And despite a valiant effort to declare the pond off limits, they may as well have been fighting the tide, because it wasn’t long before a horde of finely dressed youngsters were diving in and having a blast, therein remembering an ancient building process woven deep into all of our ancestral memories. Eventually the adults gave it a try and had a surprisingly good time too. And so, here again, the building process became a community-building process, in every sense of the word.

Rocket stoves are a very clean-burning technology, dating back through antiquity. Archaeological evidence of such hearths dates back more than 5,000 years in many regions of the world. The rocket fire chambers burn super hot as they draw all of the smoke/gasses into the flame path. This makes for a (largely) pollution-free burn that conserves fuel and protects respiratory systems. Part of the intent in sharing this technology in the kitchen was to invite people to discover how much heat can be generated with so little fuel and pollution.

Given the intensities we now face on the heels of COVID-scare isolation, Pat thinks remembering how to gather round the cooking hearth is good.

You can read the original articles at eatinscanada.com and www.cowichanvalleycitizen.com