In the heart of the Thar Desert in the Indian state of Rajasthan, this girls school was a pro-bono project by New York–based architect Diana Kellogg commissioned by a non-profit group. The school will serve more than 400 girls from households below the poverty line in the region where female literacy is just 36 percent. 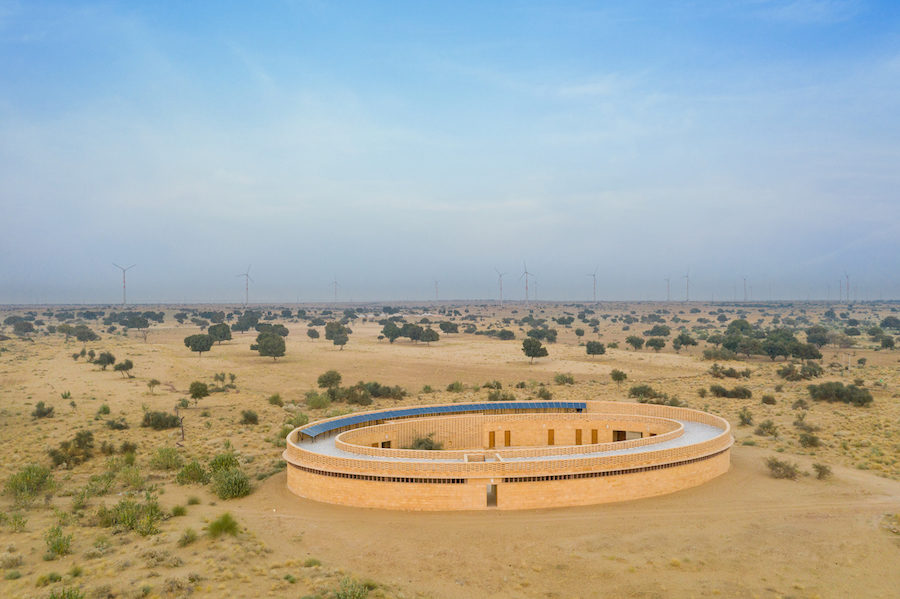 The nearly 9,000-square-foot school was constructed by local craftsmen—many of the girls’ fathers—with hand-carved Jaisalmer sandstone sourced from the area. “Stone was so abundant and the craftsmen so skilled, it was really the only option,” Kellogg says. “When I asked about different design ideas they smiled and proudly said, ‘We can do anything in stone.’” 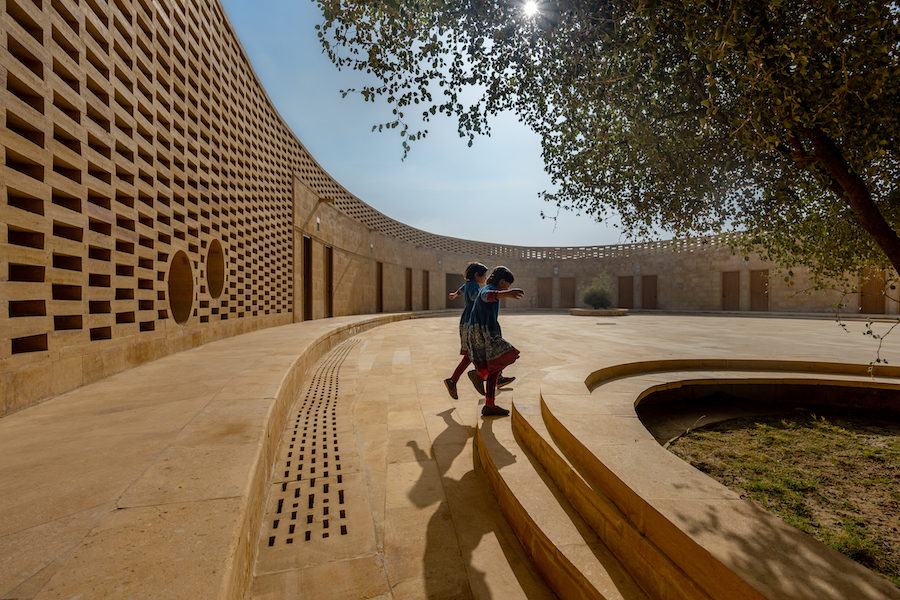 Given the harsh desert environment, Kellogg focused on sustainable elements,  and oriented the ellipse-shaped building to filter out sunlight, maximize air flow and wind throughout the series of 10 classrooms and computer center, while also utilizing a passive solar cooling strategy. 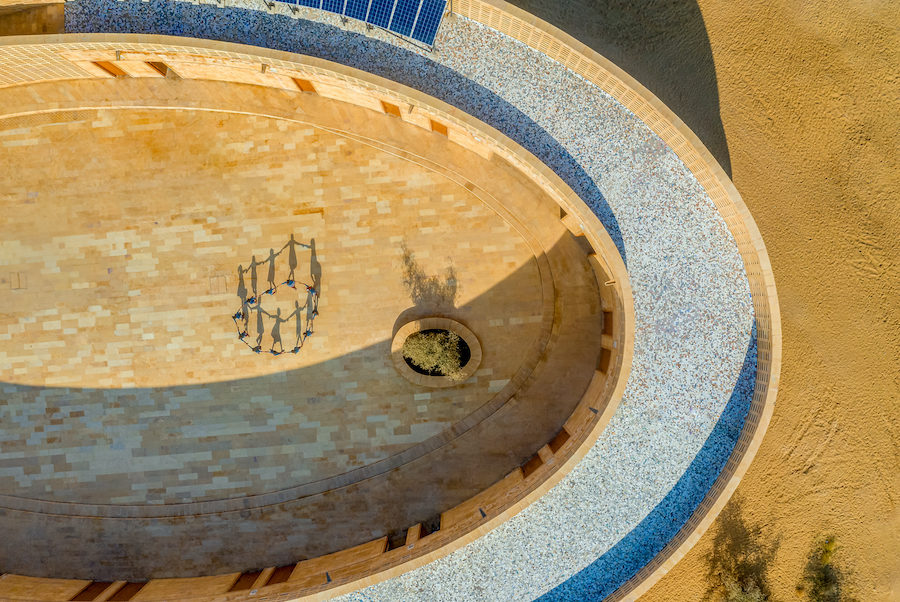 The team followed ancient regional water harvesting techniques to help the school harness precious rainwater, and created a rooftop solar canopy with a metal framework that powers the interior lighting and fans but can double as a jungle gym for the children. 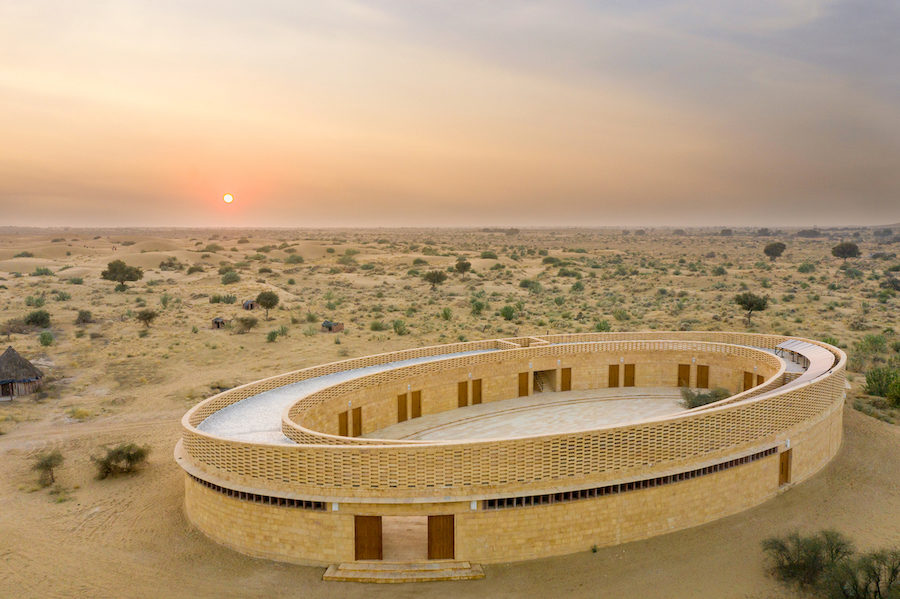 “I knew I wanted to do a building that simultaneously blended and grew out of the natural landscape, much like the Jaisalmer sandstone,” Kellogg said. “I was also committed to sustainability and using the stone in a modernized way to bring attention to the craftsman in the area.” 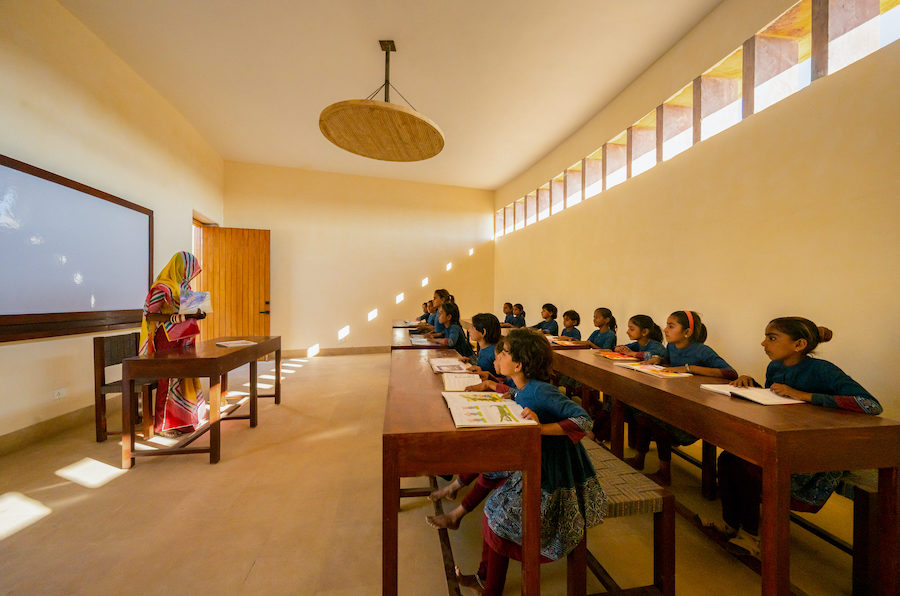 Inside, the school is furnished with pieces made from local rosewood and Charpai woven seating, a traditional bed technique used across South Asia.

The newly-completed structure is to be part of a larger complex called the GYAAN Center, which will include an exhibition space called the Medha and the Women’s Cooperative building, where local artisans will teach women traditional handcraft techniques.

You can read the original article at www.architecturalrecord.com where there is also a nice Video showing the project.