Kathleen Draper, a climate change activist has constructed a 1,500-square-foot, three-bedroom straw bale home that she said will help reduce global warming and keep her comfortable in the harshest New York winter. “I call it my ‘dwelling on drawdown’ project,” she said, referring to the future point at which the atmosphere’s greenhouse gas levels stop climbing and start declining, halting climate change. 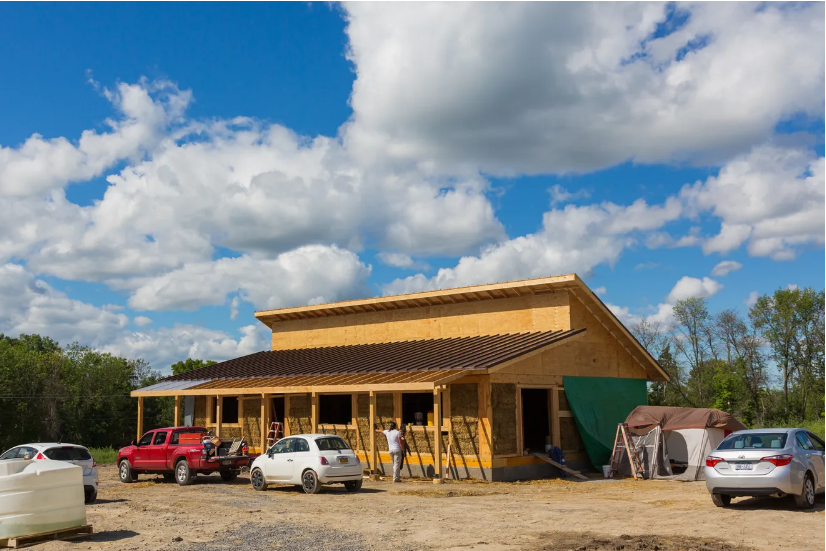 Draper hosted a straw bale building workshop for about a dozen local and out-of-state enthusiasts, many of whom hope to build their own straw bale homes in the future. The two-day event brought like-minded people together to hone their skills while taking a huge bite out of a sizable project. Volunteers hauled, measured, trimmed and stuffed bales into precise, plumb exterior walls. Loose straw would later be run through a hammermill and added to plaster that would cover both the interior and exterior of the bales.

“What I’m trying to do here is sequester as much carbon in different ways as possible,” said Draper. The more than 200 straw bales she used were the waste product of two to three acres of wheat harvested about five miles from the house. And much of the structure’s white oak, cherry, ash and hemlock lumber was cut locally. “I’m trying to use as much locally available lumber as possible,” Draper said. 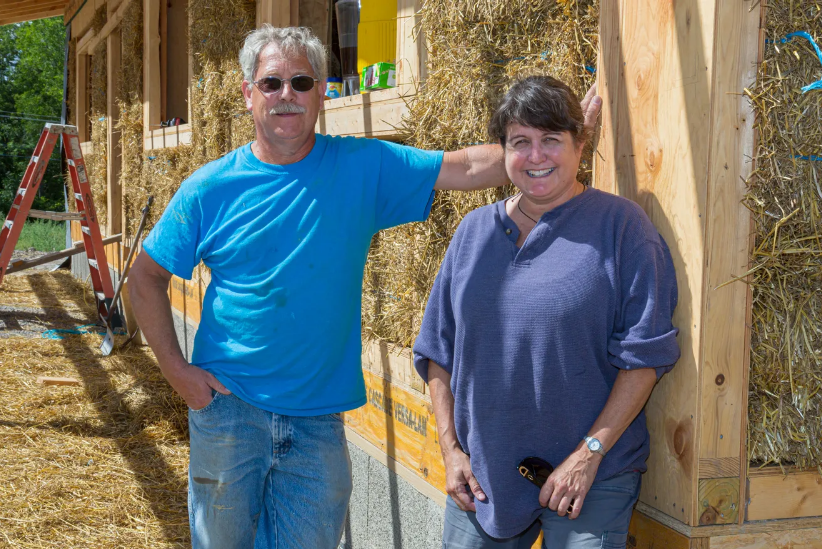 Last year, New York state passed some of the strongest climate change legislation in the country, Draper said. “And if we’re serious about obtaining those targets, we have to change the way we build houses and the way we use energy,” Draper said. “This is my attempt to minimize the amount of energy needed to keep a house heated and cooled.”

The home will use no fossil fuels but instead will be heated and powered by electricity, she said. Eventually, Draper plans to create her own renewable electricity. “I think it can be done cost effectively and I think it can help in your retirement years to minimize the amount of money you have to spend heating and cooling your house,” she said. “So it’s smart on many different levels — economically, environmentally, and it’s very non-toxic.” 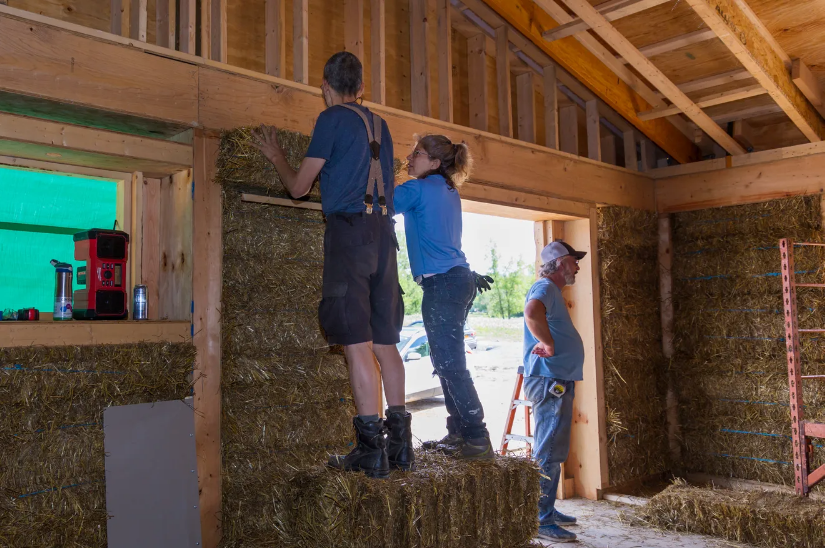 The plaster breathes so mold issues are less likely than with dry wood, she said. And the paints are free of volatile organic compounds, or VOCs. “We tried to be really cognizant of that sort of thing,” Draper said.

Wheat and straw allergies? No problem. Guests will be able to breathe freely, because the house will be fully plastered and sealed inside and out, she said. And even the traditional “truth window” built into all straw bale structures to prove they were really built with straw will have glass or plastic over it. 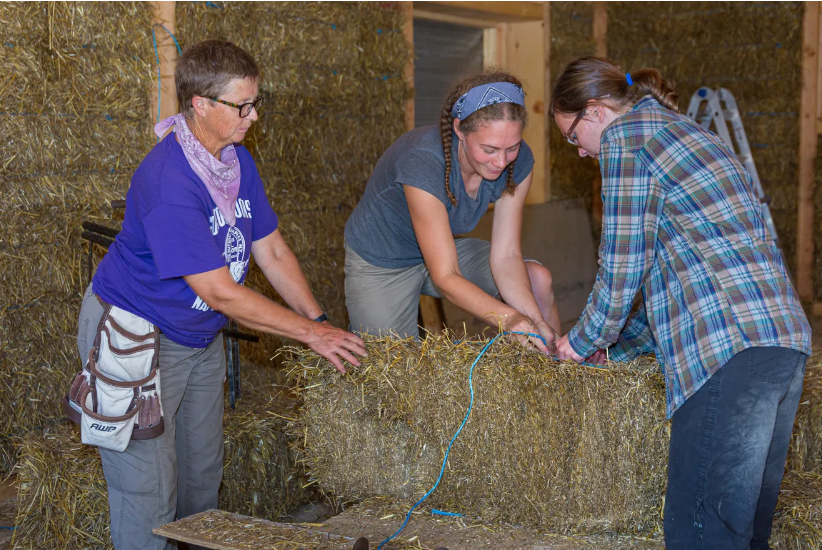 South-facing clerestory windows on a split roof will limit sunlight in the heat of summer and welcome it in the cold of winter.  A 200-square-foot covered porch will shield south-facing windows from the summer sun. Deep-set windows will boast live edge ash and cherry window sills. An air source heat pump will eliminate the need for fossil fuel. A wood stove will eventually be installed to cut heating costs even further.

Does a straw bale house present a greater fire risk than traditional stick-built homes? Draper said no. “Believe it or not, straw bale houses are some of the few that survived some of the California fires,” she said. “Because they are so tightly packed, it’s very hard for a fire to start. It will have an inch and a half of plaster on each side. So it’s hard to get fire in it. And once it’s in it, there’s not a lot of air to help combustion.” 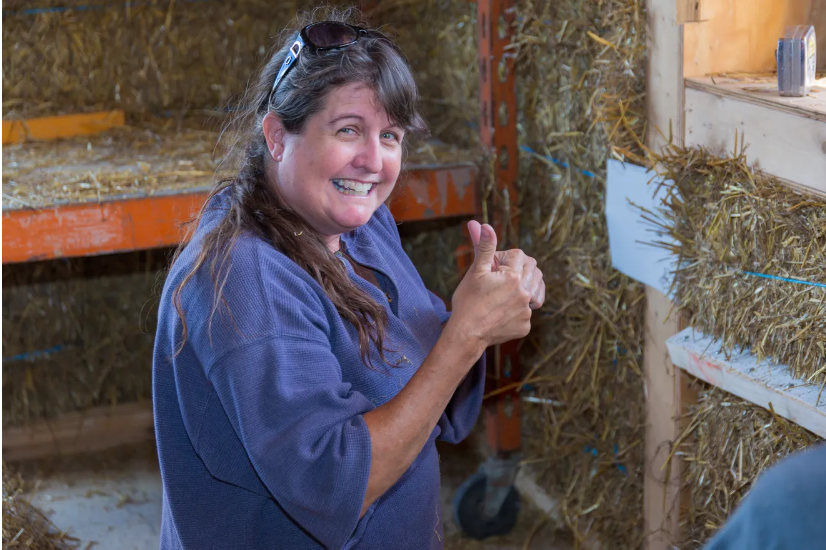 Draper estimates her new home could ultimately ring in at upwards of $250,000, including architect fees. “I was shocked at how much certain things cost, but heard that certain building supplies went up 30 percent this year,” she said. “Plumbing and electric alone were about $45,000, including my Air Source Heat Pump, and materials were easily $50,000 and still going up as I finish the inside.”  Fortunately, the two-acre plot on which Draper’s home sits is part of her family’s 500-acre cattle farm.

Meanwhile, the former co-chairwoman of the Victor Sustainability Advisory Committee will carry on in her role as U.S. director for the Ithaka Institute for Carbon Intelligence, a nonprofit, open-source organization focused on the use of biochar in climate farming, agroforestry and other industrial uses. Biochar is organic material that’s been baked at a high temperature and converted into a charcoal-like substance.

“It’s time to start putting these things into action,” Draper said. “I’ve been in the world of sustainability for 10 years now. If I’m going to preach it, I’ve got to do it. Hopefully it will inspire more ‘carbon sink’ homes and landscapes to be built.”

You can read the original article at www.mpnnow.com