Farming is the primary source of livelihood for about 58 per cent of India’s population. India is the world’s largest producer of pulses, rice, wheat, spices and is the second largest producer of fruits and vegetables in the world. But with he impact of climate change and low incomes, farming communities are quite vulnerable. Over the past 23 years, more than 330,000 Indian farmers have committed suicide! 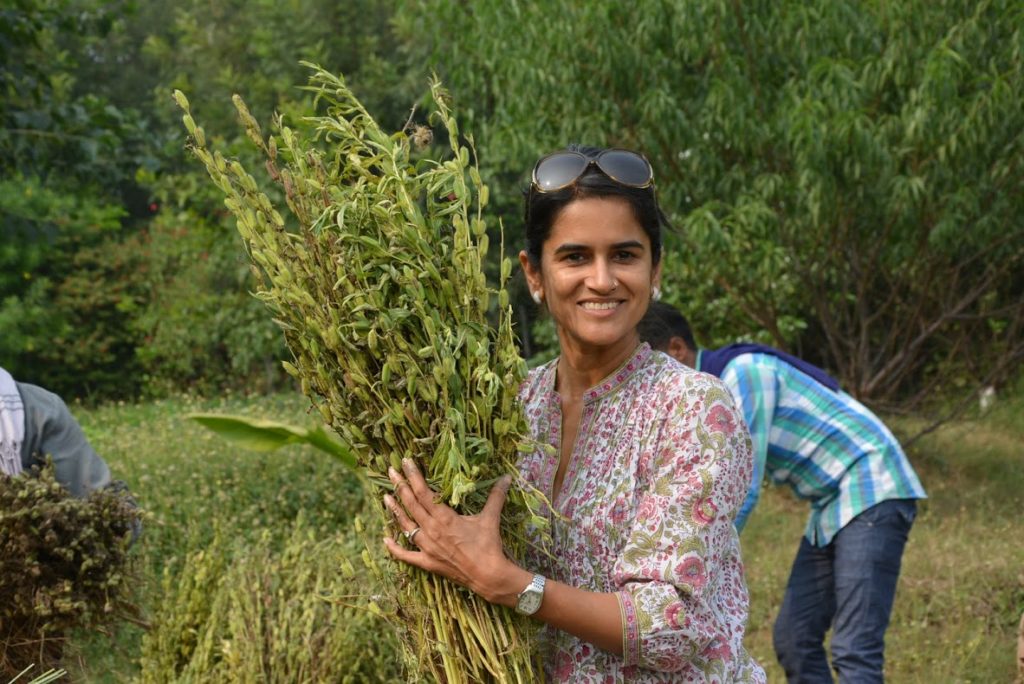 Manisha Lath Gupta is creating real change through her family farm, Aanandaa. In an interview, Manisha explains how:

“My husband and I set up Aanandaa Permaculture farm in 2011; at that time, we both had corporate careers and lived in Mumbai. Our motivation came from a strong desire to grow and harvest our own food and water. We wanted to be confident, knowing that we were consuming uncontaminated produce; there was also a desire to create a piece of nature for our children.”

“The real push came when we learnt about permaculture; a practice which mimics the ecology of a forest. Over time it builds an eco-system and a food forest, which becomes more productive over the years, while input and effort decrease. It sounded like an idea that we could pursue and in 2010 we bought some land near Chandigarh, our hometown.”

“We started with a barren piece of land and carefully planned its restoration. We planted a windbreak of trees, to provide shelter from the wind and to protect from soil erosion; built raised beds and water management structures, including channels, pools, swales and ponds. We also mulch our soils, putting the carbon back. By reducing tilling on the fields, multi cropping and allowing the animals and birds to play their role – we created an eco-system and food forest.”

What impact do you want Aanandaa to have?

“Our main purpose is to grow food for our community of family and friends; and to revive a barren piece of land and care for the earth. Growing your own produce means you will never contaminate the food you are consuming. So Aanandaa has the biggest impact on my family and others in our circle who consume our food. We also want to influence others around us – our friends in the city and the neighbors in the village to do the same, thereby creating change.”

“In recent years, we have received many urban visitors who are keen to pursue a similar path and Aanandaa has become a model farm to study and pursue. Our biggest impact will be, when we can convert chemical farmers in our neighborhood to focus on eco systems, conservation and restoration of their soil. That is really the biggest challenge ahead of us and we have started work in that direction.”

Who do you hope to engage?

“It’s heartening to see farms like Aanandaa starting across India and I see a huge interest from the youth, who are questioning their consumerist lifestyle and are adopting a more sustainable way of living. Now, is the time for change, otherwise, at this current pace of consumption, there will be few resources left for future generations, including the basics like water and food.”

“There’s an enthusiasm in urban areas to learn about organic farming and consume organic food. However, buying organic food is not enough. We must change our lifestyles to reduce consumption, reduce packaging and care for the earth. The urban affluent need to pause, reflect and try to live more consciously. I hope our story of Aanandaa, will inspire more corporate folks to put their money into saving nature for future generations.”

Do you think farming in India needs to change?

“Farming in India and across the world, definitely needs to change! No doubt about that, I believe the introduction of chemicals was the worst influence on agriculture, as prior to that, Indian agriculture was largely organic.”

“For small scale land holdings, which is what we have in India, organic farms were great for the local economy, producing vegetables, fruits and staples for the local population. The lure of higher productivity and yields, our farmers got trapped into the vicious cycle of chemical farming. This has made their soils dependent on chemicals, which have rising costs annually, while the selling prices remain more or less constant. It’s a hostage situation.”

“Chemical farming also saw a shift in cropping patterns. Farmers gravitated to growing cash crops, giving up growing their traditional crops like millet, which did not come with hybrid seeds and supporting chemicals. Almost all crops, that grow without pesticides and fertilizers, have been done away with. There is a glut of some crops and complete absence of others.”

“There was a time when farmers used rain water, local ponds, lakes and watershed management programs for irrigation, they were in tune with the cycles of nature and dependent on their forests and rains for water. The introduction of the tube-well changed things and the marginal farmers without a water source became further marginalized. While the larger farmers with water, chemicals and machines at their disposable, became more dominant in the village social structure.”

“Sadly, India’s government policy continues to support chemical farming, with large corporate and big money involved. Most government bodies and television programming here still focuses on – ‘which chemical should be added to which crop.’ Governments are not focused on making farming a self-sustainable profession – farmers are becoming increasingly dependent on subsidies.”

“Compounding all this, is the lack of good primary and secondary education in our government schools. Children in villages, are not educated to understand the science of farming or the inter-dependencies of the eco system they live in.”

“I have read many books on farming and agriculture, and the one thing that stands out for Indian farmers is the role of the Indian cow. The cow dung and cow urine of the Indian cow (not Jersey or Holstein cows) have great properties for soil and plants; we make all our fertilizers and pesticides with cow dung and cow urine, in addition to other locally grown ingredients like Neem, Chillies, Garlic, Jaggery etc. Global communities should look at the Indian breed of cow, as a source of fertilizer and pest management. Maybe instead of giving us their cows, the West, should look at adopting some of ours!”

What have been the challenges you have faced, particularly as a female entrepreneur?

“I would still like to call myself a farmer and not an entrepreneur, as we have not yet commercialized Aanandaa. I think the biggest challenge has been to work with the local men in Haryana, which is a state known for its lowest sex ratio and highest rate of female infanticide. Plus, being a first-generation farmer is challenging, especially to gain the support and conviction of the local farm help, who have been born into farming families.”

“There is still a lot of work left for us to do at Aanandaa. I want to make it into a fully commercial farm to convince the neighbors that this way of farming is not a ‘leisure activity’, but a financially sustainable and economically viable model of farming. Taking the idea of sustainable agriculture and reviving the rural economy in my village cluster, would be the next objective for Aanandaa and I suspect it will take a decade or more, to make this transition.

If you could give reader’s one takeaway, what would it be?

“India is a fertile country, almost everyone has access to farm land, either ancestral or in the outskirts of the city. I would urge people to reclaim a piece of land and start giving back to the planet. It’s a very rewarding journey. Trust me!”

You can read the original article at indiacsr.in