Biobased Creations CEO Lucas De Man believes that natural building materials such as timber, hemp, straw and mycelium could completely replace polluting, non-renewable materials such as steel, plasterboard and cement. Buildings can be made exclusively from plant-based products plus natural mineral materials such as earth and lime. 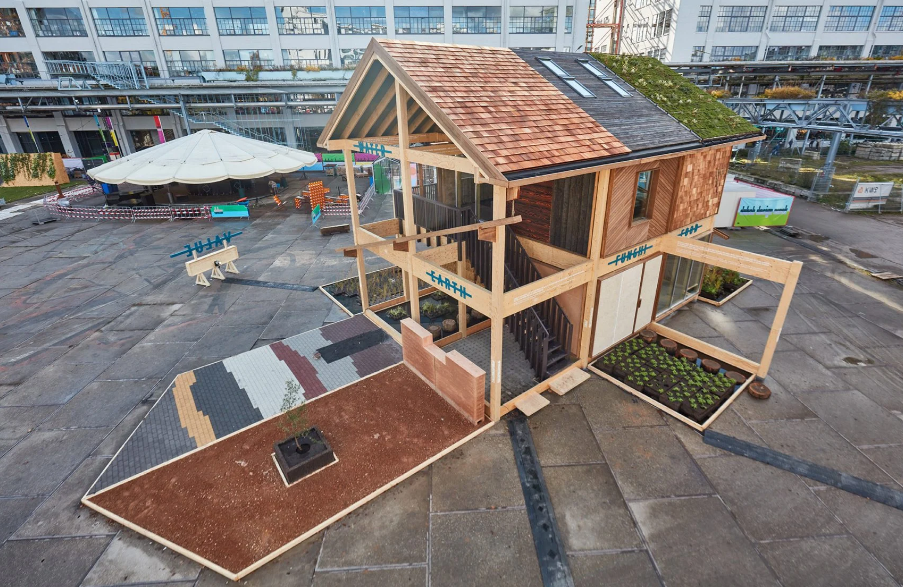 An all-natural show home built at this year’s Dutch Design Week aims to prove that biomaterials can be used to build houses at scale and features 100 different plant-based or natural materials that are commercially available already or launching soon.

De Man predicts a radical shift towards plant-based and natural materials as people increasingly demand more sustainable buildings and legislation to reduce carbon emissions is introduced. De Man also believes that the construction industry will eventually embrace the principles of the circular economy. “I think the biggest shift will be our concept of time,” he said. “Now we want to build everything forever, for eternity. I think we have to embrace the fact that things are temporary.” 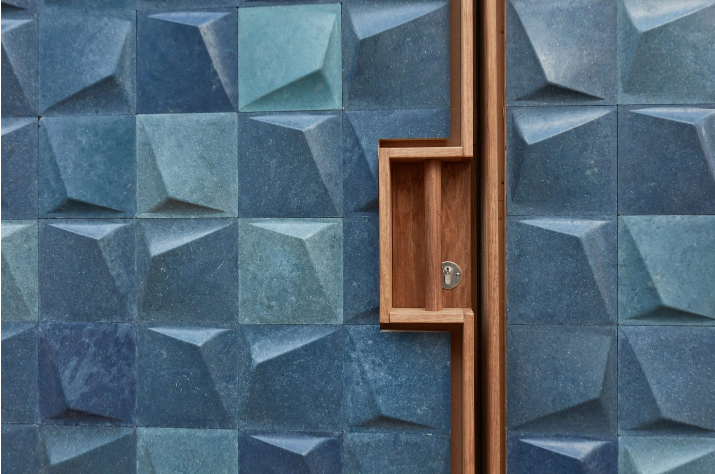 The show home at Dutch Design Week in Eindhoven also features materials made from algae, bacteria, jute, linen, food waste and sewage. The only non-bio materials in the timber-framed house are metal screw fixings and glass windows.

The house, which features a modular design, was mostly built in a factory. It has a layout based on a standard grid so it could become a template for a variety of different house designs. “Some people think it’s too expensive to be modular and sustainable, but it’s actually cheaper,” he told Dezeen.

The structural timber frame can be dismantled so the house could be relocated or recycled in the future. 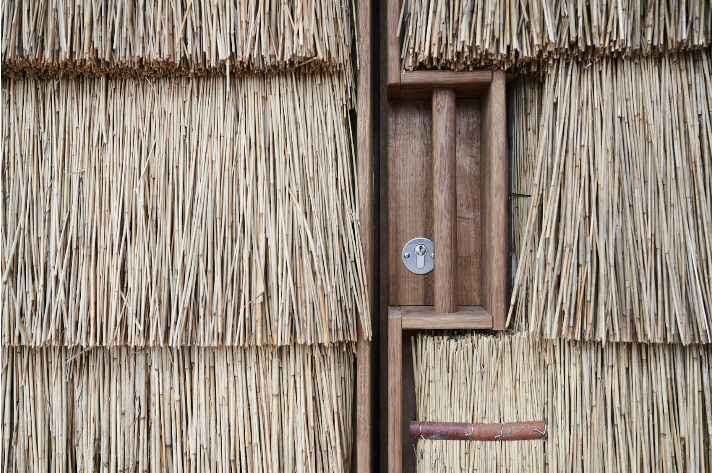 Biomaterials provide surfaces both inside and outside the house. They cover walls, floors and ceilings, and are also used for furnishings including tableware and bedding. These materials are presented in different categories relating to their material properties. 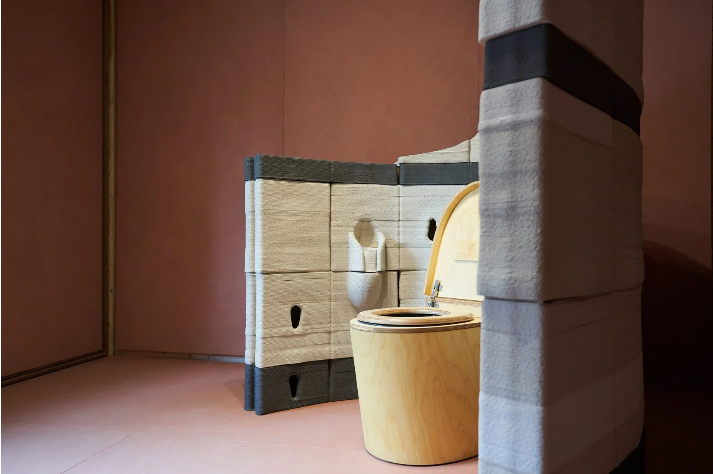 The bathroom features materials made from waste, with examples including blue wall tiles made from sewage and algae, and a compost toilet framed by a wall of 3D-printed sewage sludge. 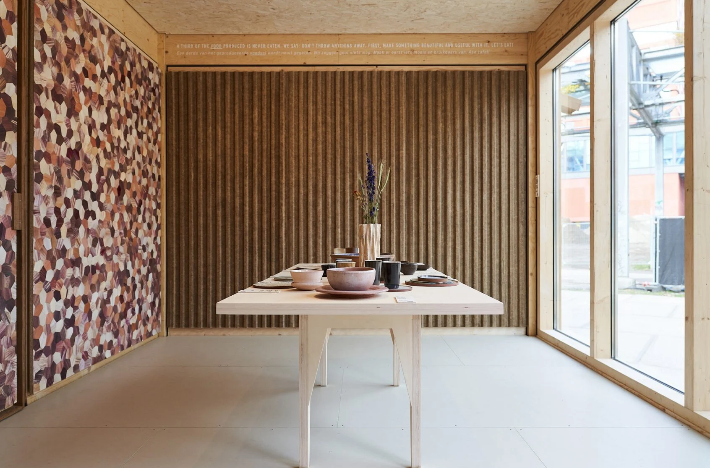 The kitchen showcases materials made from food and plants and includes tableware made from plants and food waste including plates made from eggshells and beakers from 3D-printed seaweed. The ceiling is a material made from flowers, the walls are lined with grass and the door is clad in Totomoxtle, a wood veneer that promotes biodiversity because it is made from heirloom corn species. 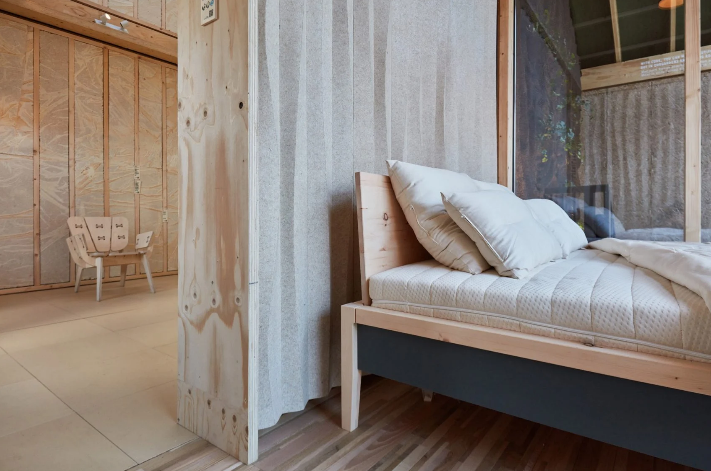 Elements on display include insulation made from reeds, seaweed wall tiles, acoustic wall panelling made from bioplastic and a bed made from natural rubber and linen. 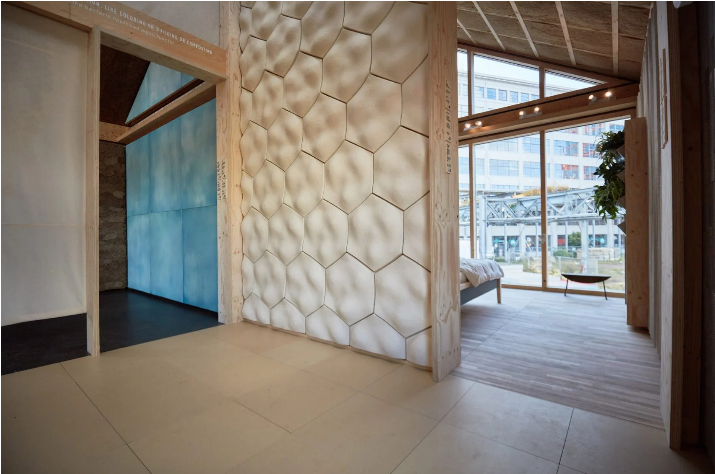 There’s also a whole room dedicated to products derived from bacteria and fungus. Mycelium is used to create wall tiles, insulation and a composite flooring.

“We’re going to solve a lot of problems by reinventing bacteria,” said De Man. “In Holland, they are now making bacteria that can eat plastic and give back oxygen.”

An air filtration system integrates plants and nutshells while rainwater is harvested and reused. The house also features six different roof types, including two types of green roof and paving that absorbs rainwater.

The house is on show for the duration of Dutch Design Week. After that it will be reassembled at the Floriade Expo, a horticultural exhibition taking place in 2022.

Photography is by Oscar Vinck and Jeroenvander Wielen.

And you can watch a video about the house on www.youtube.com

1 thought on “Home Made from 100 Different Natural Materials”