Thousands of people in Puerto Rico are still living under blue tarps three years after Hurricane Maria struck the island, and more than 30,000 families have asked the government for assistance after the storm destroyed or damaged their homes, with not everyone eligible to receive help.

This is why Paula Paoli and Owen Ingley are in Las Marías, Puerto Rico, and hope to introduce a new construction technique that helps homeowners avoid the destruction of houses in the future. The couple want to expand the use of biodegradable domes to help people who have lost their homes replace them with structures that have the resiliency to withstand weather events that devastate Puerto Rico with increasing frequency. 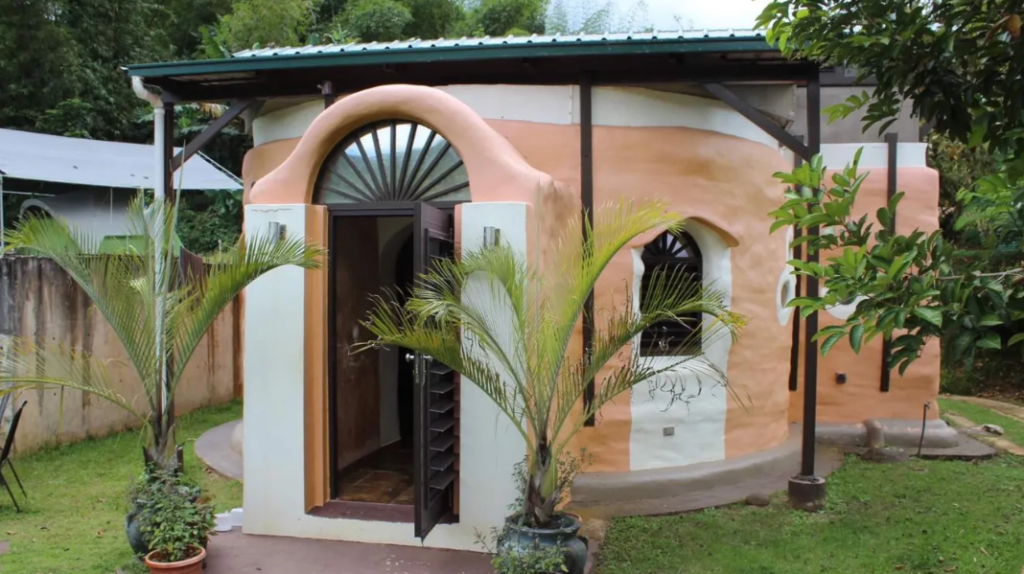 These “SuperAdobe” structures proposed by Paoli and Ingley use sandbags, barbed wire and on-site earth as its essential components, and the bags are piled on top of another, plastered and painted. This type of construction has evolved from military bunker structures and allows for rapid building, with some homes taking just over 24 hours to assemble. According to Ingley, the rapid turnaround, as well as the inexpensive materials, make SuperAdobe housing a cost-effective solution to provide temporary or permanent housing to people who lose their homes after a natural disaster. 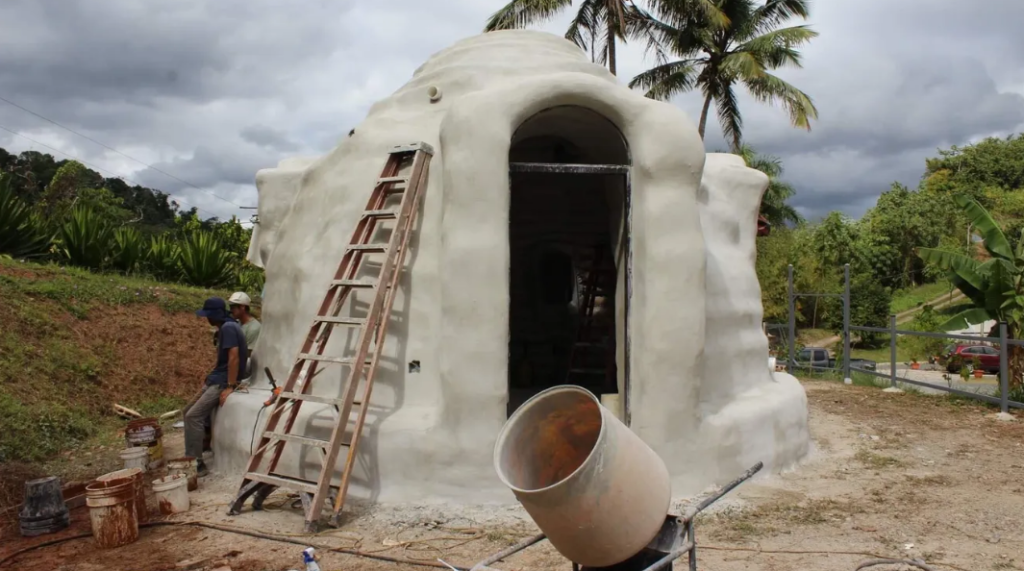 The couple founded Plenitud, a nonprofit educational farm and community in the western part of the island. They build these homes as emergency relief and promote SuperAdobe as a alternative to other kinds of new homes in case other category 5 hurricanes strike. To accomplish this, Ingley’s school, CalEarth, is requesting official recognition of SuperAdobe as a safe and sustainable building material by the International Code Council. It is up to some nonprofits to further the construction of this type of housing on the island, since it is not an officially approved repair or reconstruction method for the Federal Emergency Management Agency.

After several years of putting the construction through various stress tests – rain, wind, fire, sleet, snow – the SuperAdobe construction method is finally coming up to a final assessment by the International Code Council, a body of construction experts and engineers that certifies acceptable methods for construction.

Across Plenitud’s farm, visitors can spot the SuperAdobe domes, which vary in size and color.  At first glance, a SuperAdobe house resembles an igloo. According to Ingley, earthbag buildings are resistant to the heavy winds and flooding of a hurricane, as well as the movements of an earthquake. The materials also make this type of building environmentally friendly. SuberAdobe was founded on the idea that builders can use dirt and other materials found onsite, making this type of building environmentally sustainable.

“When Hurricane Maria hit the island in 2017, we built three pilot demonstration homes and they all sustained no damage during the hurricane,” says Ingley, co-founder of Plenitud. Those SuperAdobe houses were in Las Marías, Arecibo and Maunabo, where dozens of conventionally constructed homes were destroyed.

SuperAdobe home materials offer flexibility and strength, allowing the building to shift without cracking or breaking. Ingley also builds each roof with an arch shape, since it  resists heavy wind  better than flat ones.

In Puerto Rico, 28,706 families asked the government for assistance to repair their homes after Maria’s destruction, but only 6,146 homes were eligible under Puerto Rico’s Repair, Reconstruction, or Relocation program as of last June. Ineligible individuals either didn’t meet the program’s low income threshold or did not have the official deed to their property.

FEMA was granting up to $60,000 for home repairs or $150,000 to rebuild or relocate after Maria hit Puerto Rico. With a full grant and a conservative budget, an individual could build more than 18 permanent SuperAdobe homes.

Ingley studied bioconstruction at the California Institute of Earth and Architecture, a nonprofit organization focused on the development and research of earth architecture. The institute, also known as CalEarth, is at the forefront of popularizing SuperAdobe construction across the country.

SuperAdobe construction is permissible only through specialization permits granted by a county building department, usually approved for emergency or research purposes. For earthbag-building to be allowed without a special permit, it must be approved by the International Code Council. This is because building departments need a way to inspect, and having ICC standardization allows inspectors to obtain building plans to know what works and what doesn’t when it comes to earthbag building.

Before the ICC approves a specific building material, it must go through fire, rain, sleet, snow and wind-resistance tests, among others.

For the past four years, CalEarth has been working with the ICC to have earthbag building standardized among ICC codes. According to CalEarth’s president, Dastan Khalili, SuperAdobe could be included in ICC codes in the next six to 12 months.

“We’re in the last phases of testing with the ICC right now,” Khalili said. “With many people homeless and living in inadequate housing, the solution is right under their feet.”

Once adopted into the International Residential Code, each code must be specifically adopted by a jurisdiction to become a part of its building regulations, with room for modifications.

This year, Hurricane Laura and Hurricane Sally caused devastation in Puerto Rico and states in the Gulf Coast, with some of them still recovering from past storms. In Puerto Rico, former Housing Secretary Fernando Gil said in September 2019 that an overall estimated 20,000 to 25,000 ”blue roofs″ remained across the island, referring to the tarps stretched over damaged buildings.

As climate change worsens, Plenitud’s Ingley believes that SuperAdobe housing can provide a solution for halting the damage created by natural disasters. “It’s a building technique that’s attractive for considering the problem of how we can have affordable housing that’s resistant to global climate change,” Ingley said.